“I was more concerned with how to keep my mom looking good, than expressing my true emotional reality.”

Drew Barrymore and Jennette McCurdy have bonded over their complicated relationships with their mothers.

The “iCarly” alum joined the talk show host to launch her new digital series called “Barrymore’s Backstage” on Monday. Like McCurdy, Barrymore’s acting career began when she was a child. But, according to the “E.T.” star, that is not the only thing they share in common.

Back in August, McCurdy released her bestselling memoir, “I’m Glad my Mom Died”, which included harrowing stories of enduring “decades of torment, exploitation and manipulation inflicted by her very own mother” after “years of suffering in silence.”

Drew and Jennette spoke about the complex and challenging work of self-understanding — and mothers in general.

“I think when it comes to our moms, we want so badly to have this relationship,” the “Charlie’s Angels” star admitted. “It is nature, it is nurture, it’s evolution.”

Drew then asked, “When you met your therapist is it true you were like, ‘My mom’s great. Things are good.'”

“In retrospect I see I was disclaiming every single thing my mom did instead of just stating the reality or how I felt about it,” the 30-year-old acknowledged. “I was more concerned with how to keep my mom looking good, than expressing my true emotional reality.”

Both McCurdy and Barrymore recalled wanting a “good family” growing up, and while Jennette has yet to have children, Drew, who shares two children with ex-husband Will Kopelman, opened up about questioning whether or not she wanted to start a family due to her experience with her own parents.

“I didn’t even know if I was going to have children because of my relationship with my mom,” Drew said before referring to her divorce with Kopelman, sharing how painful it was. “And then when I did and it didn’t work out I didn’t think I could experience more trauma, failure and emotions when that happened.”

“Oh this is the big one, I thought that happened when you were 13,” she said of the emotional toll. “We can always be surprised that the nervous breakdown is going to happen at 40 and not 13 in a mental institution.”

However, Drew said she is “now doing great.'” 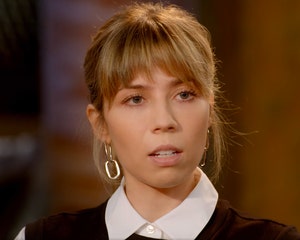