By Milly Vincent For Mailonline

A former friend of painter Francis Bacon has claimed that a BBC documentary led thieves to his home where he kept an £8million painting that Bacon had given him.

Barry Joule claimed that the corporation filmed the exterior of his 15th-century home in Normandy, France, and Bacon’s Pope painting inside without his consent as they interviewed him for a documentary.

Mr Joule, who was a neighbour and friend to Bacon from 1978 until the artist died in 1992, was given the painting by Bacon after saving his life with CPR as he suffered a ‘minor heart attack’ in January 1992.

He claims he asked the programme makers not to include a shot of his home or the painting for security reasons, The Telegraph reports.

Shortly after the documentary was aired Mr Joule was burgled for the painting, which was cut out of it’s frame after ‘highly professional’ thieves tapped his phone so they knew when he was out. He believes this sequence of events was not coincidental. 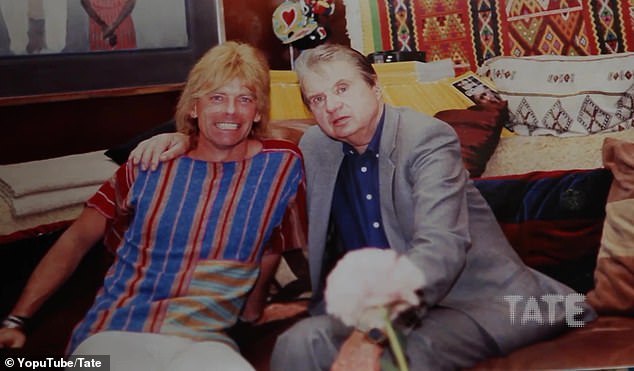 Barry Joule claimed the BBC filmed the exterior of his 15th-century home in Normandy, and Bacon’s Pope painting inside without his consent. Pictured: Joule with Francis Bacon (right)

Mr Joule, who lives in France, told The Telegraph: ‘The BBC have ruined my life.’

The £8million painting was not insured as it was costly to do so and Mr Joule had believed it would be safe in his home where only his friends knew it was kept.

The BBC documentary The Strange World of Barry Who?, which aired on BBC4 in 2002, focused on Mr Joule’s life and how he came to be friends with three prominent artists of the 20th century – Francis Bacon, dancer Rudolf Nureyev and model Toto Koopman.

Information on the programme from the BBC’s website reads: ‘A friend and confidante to the stars, Barry Joule is said to have inherited money, paintings or property from artist Francis Bacon, dancer Rudolf Nureyev and model Toto Koopman. But how did this little-known man become one of the greatest arts networkers of all time?’ 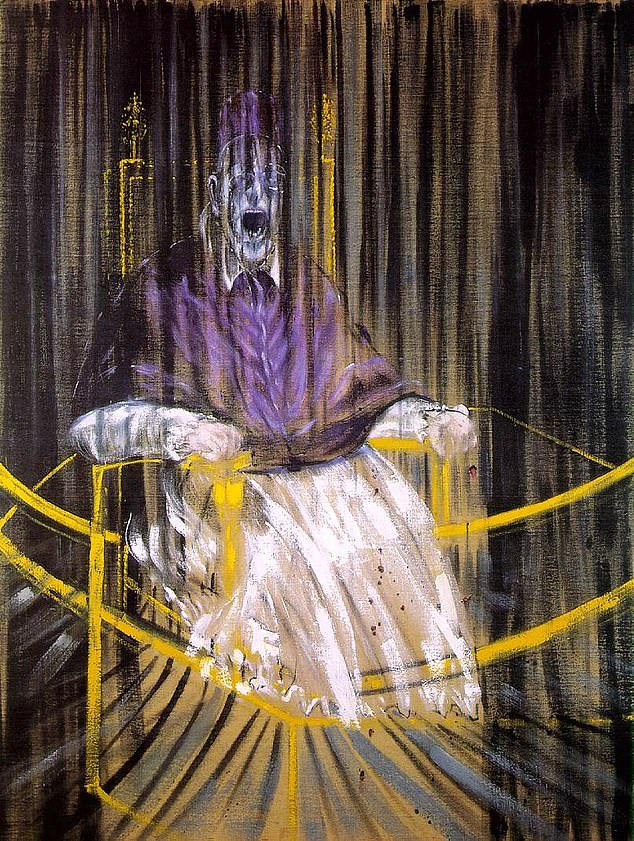 Shortly after the documentary was aired Mr Joule was burgled for the painting (a similar Pope painting by Francis Bacon pictured), which was cut out of it’s frame

Mr Joule told The Telegraph that the profile on him had made him look ‘suspicious’ as well as claiming it led to the burglary.

Mr Joule claimed that he had told the 15 to 20 executives at the BBC’s White City offices to take out ‘identifying features’ on his house, which he said they agreed to remove but then failed to do so.

He added that the police believe the painting could be in Moscow with a ‘gangster collector’ as people had claimed to have seen it.

Mr Joule told the Telegraph that the recent revelations around BBC’s Martin Bashir’s deception of Princess Diana in order to obtain the BBC Panorama interview had encouraged him to come forward with his own story.

Bashir who was found to have told a total of 38 lies, smears and allegations to earn Diana’s confidence by the Dyson report published two weeks ago.

A BBC spokesman told The Telegraph: ‘When people raise concerns of this kind about programmes, we of course look into them. This is a programme made nearly two decades ago and it is clear that recollections differ… If Mr Joule has concerns about the film, we welcome the opportunity to speak to him directly.’