By Jack Wright For Mailonline

A top-secret Ministry of Defence dossier containing 50 pages of classified information about the Russian threat to HMS Defender ahead of its provocative Black Sea trip and British Army plans for Afghanistan have been found by a member of the public at a bus stop in Kent.

The dossier, which includes emails and PowerPoint presentations, originated from the office of a senior official at the MoD and were passed to the BBC by a member of the public after making the discovery.

It includes highly sensitive information relating to HMS Defender, the Royal Navy’s Type-45 destroyer which sailed through disputed territorial waters off the coast of Russia-annexed Crimea in eastern Europe.

The documents show that a mission described by the MoD as an ‘innocent passage through Ukrainian territorial waters’ was a calculated decision by the Government to make a show of support for Ukraine, and was conducted in the expectation that Russia might respond aggressively.

The BBC reports that the mission, dubbed ‘Op Ditroite’, was the subject of high-level discussions as late as Monday, with officials speculating about Moscow’s reaction if HMS Defender sailed close to the peninsula.

On Wednesday more than 20 Russian aircraft and two coastguard ships shadowed the warship as it sailed about 12 miles off the coast. The Russian Ministry of Defence said a patrol ship fired warning shots and a jet dropped bombs in the destroyer’s path, but the UK Government rejected this accoun and denied that any warning shots had been fired.

Another document contained in the dossier found at the bus stop in Kent reportedly details plans for a possible British military presence in Afghanistan after the US-led NATO operation there ends.

The Government has now launched an urgent probe into the matter, with an MoD spokesman telling MailOnline that an employee had reported the loss of sensitive defence papers.

In a statement, the MoD also insisted that HMS Defender conducted ‘innocent passage through Ukrainian territorial waters in accordance with international law’.

A spokesman said: ‘The Ministry of Defence was informed last week of an incident in which sensitive defence papers were recovered by a member of the public. The department takes the security of information extremely seriously and an investigation has been launched. The employee concerned reported the loss at the time. It would be inappropriate to comment further.’

He added: ‘As the public would expect, the Ministry of Defence plans carefully. As a matter of routine, that includes analysing all the potential factors affecting operational decisions. HMS Defender conducted innocent passage through Ukrainian territorial waters in accordance with international law.’

An official at Permanent Joint Headquarters, the UK’s tri-service headquarters at Northwood, reportedly asked: ‘What do we understand about the possible ‘welcome party’…?’.

Recent interactions in the eastern Mediterranean between Russian forces and a Carrier Strike Group led by HMS Queen Elizabeth had been unremarkable and ‘in line with expectations’, the document reportedly said. However, officials knew this was about to change and expected Russian naval and airforce interactions would become ‘more frequent and assertive’. 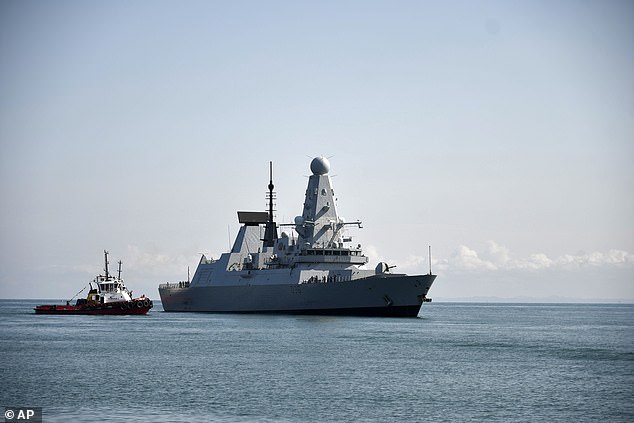 HMS Defender arrives at the port of Batumi, in Georgia, Saturday, June 26, 2021 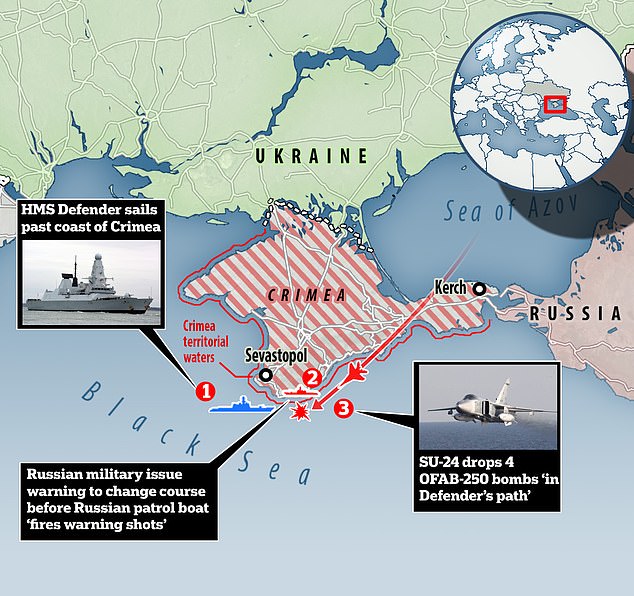 The documents show that a mission described by the MoD as an ‘innocent passage through Ukrainian territorial waters’ was a calculated decision by the Government to make a show of support for Ukraine , and was conducted in the expectation that Russia might respond aggressively