More than a quarter of extremely vulnerable people in England are still shielding despite official guidance to do so dropping in April, Government data shows.

An Office for National Statistics (ONS) report published today found 29 per cent of immunosuppressed patients or those with severe underlying health conditions were still following stay at home orders by the end of June.

Strict shielding guidance was issued during the initial lockdown last spring and applied to nearly 4million people in England who were deemed most at risk of dying from Covid, including cancer and heart disease patients.

The advice was dropped on April 1 when the second wave was flattened, infection levels were low and the vast majority of shielders had been invited for their Covid vaccines.

No10 updated its guidance for clinically extremely vulnerable people last night to say they should wait three weeks after their second jab before being in ‘close contact’ with anyone.

The new advice was revealed as Boris Johnson confirmed that remaining lockdown restrictions will be lifted on July 19 ‘Freedom Day’, despite soaring infections.

Charities said it was ‘completely unacceptable’ that measures were being scrapped in the face of a growing epidemic, leaving vulnerable people ‘abandoned and unsafe’. 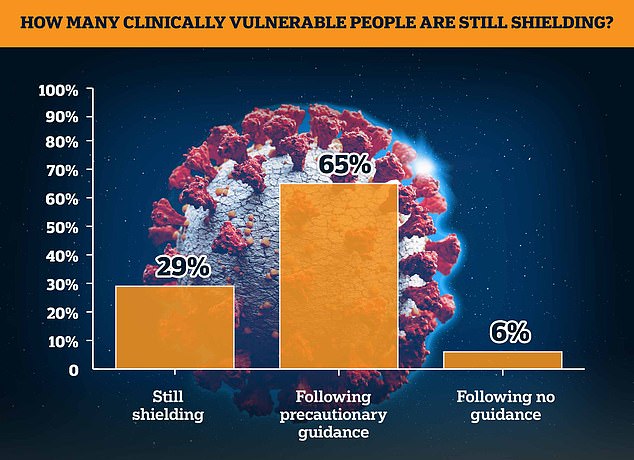 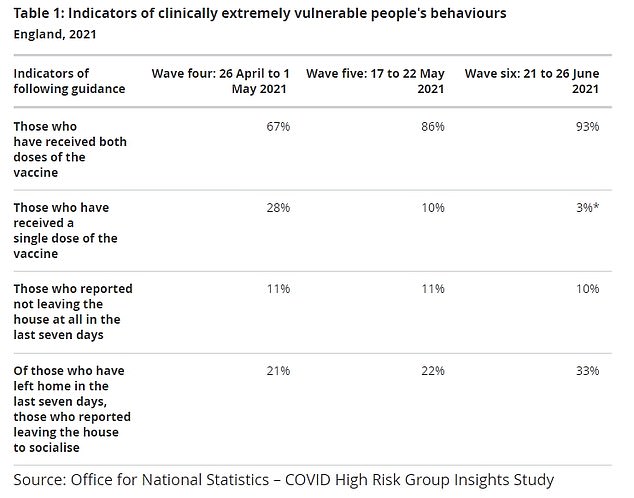 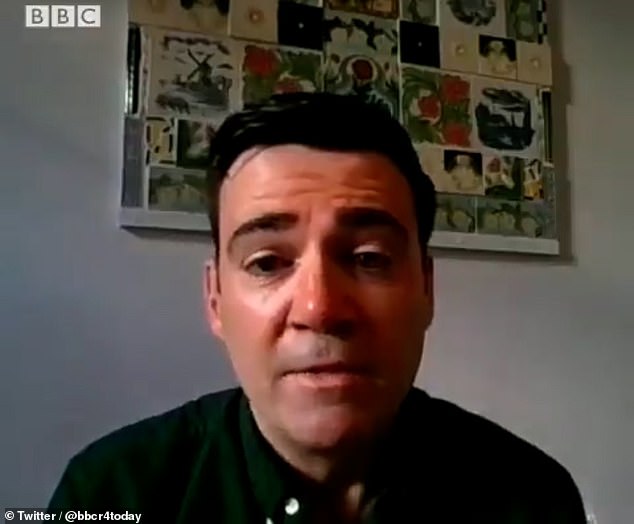 The ONS estimated that 65 per cent of shielders were taking personal precautions by the end of last month rather than following the strict shielding guidance issued last year.

A further six per cent were more liberal with their behaviours, according to the report which was based on surveys of more than 1,000 people.

It also found that 55 per cent of clinically vulnerable patients were uncomfortable going to hospitality businesses such as pubs and restaurants, cultural venues such as theatres or cinemas, education settings, and health facilities.

When asked what would help them feel more at ease, 75 per cent said mandated mask wearing at venues and regular cleaning and use of hand sanitiser would encourage them to venture out more.

Enforced social distancing was also a priority for at-risk Britons, with 69 per cent saying it would make them feel safer, with 60 per cent also wanting regular testing of those attending these public places.

Masks ‘probably won’t do any good’ after July 19 because not enough people will wear them, top SAGE expert claims – but vulnerable should still use them

Wearing a mask after Freedom Day ‘probably won’t do any good’, one of the Government’s top scientific advisers claimed today.

Professor Graham Medley accepted there was still a lack of evidence about how useful masks are but said it was his personal belief they only work when ‘everybody’ wears one.

From July 19, people in England will no longer be legally required to wear a face covering on public transport or in shops, restaurants and other indoor spaces.

But ministers and scientific advisers are still encouraging people to don a mask in crowded spaces where the risk of Covid is higher – particularly if a person is vulenrable.

‘But on the other hand, if it’s not mandated it probably won’t do any good.’

Professor Medley is the chairman of SAGE’s modelling group SPI-M, whose forecasts pointed towards a smaller wave this autumn and gave ministers the confidence to press ahead with the final unlocking.

He added: ‘I personally will wear a mask to protect other people. I think it’s quite a reasonable thing to do.

‘It doesn’t have a huge imposition in terms of economic impact or in terms of freedom, and I think there is evidence to suggest it does good, but only if everybody does it.’

‘So I think that, without the mandation, then we end up with a situation where even if the majority of people, let’s say 70 per cent of people wear a mask, will that actually do any good because of the 30 per cent who don’t? I think that is something which still needs to be determined and discussed.’

There is enough evidence to show masks offer at least some protection against catching and spreading Covid but the true extent of this protection is still unknown.

Another Government adviser, Professor Robert Dingwall, said that giving people the flexibility to choose to wear a face mask was ‘sensible’.

The sociologist, who sits on the Joint Committee on Vaccination and Immunisation, claimed the benefit of mask-wearing had been exaggerated.

He told Sky News today: ‘I think the only really sensible advice is to think carefully about whether your personal risk would lead you to think about using face coverings in very crowded situations.

‘When I’m thinking of crowded situations, I think things like the London Tube at rush-hour.

‘When I go to the supermarket on a Friday evening or first thing on Saturday morning, it’s relatively empty, I’m certainly not going to wear a mask in those situations.

‘If it was Christmas Eve and the place was heaving, that might be something to think about. Although, frankly, the benefit of masks is much exaggerated.

‘The way in which we focused on that is, I think, another signal of the levels of fear – we’re clinging to something which is visible, but doesn’t actually achieve very much.’

But many of these measures, such as the requirement to wear a face masks in many areas of daily life such as public transport, are due to be phased out of law on 19 July, the so called ‘Freedom Day’.

Ministers have admitted they are prepared to tolerate upwards of 100,000 Covid cases each day at the peak of the third wave in August and thousands of hospital admissions.

Mr Burnham said that the high levels of transmission and lack of social distancing was causing vulnerable people in Manchester a great deal of anxiety.

Speaking on BBC Radio 4’s Today programme, the Labour mayor said the test of easing restrictions should be viewing the situation through the eyes of those of the 3.8 million who are most at risk from a Covid infection.

‘Is expecting and recommending people to wear facemasks enough to give those people the confidence that they can go out and about on public transport safely?

‘I don’t think it is and that is why one person’s freedom day is another person’s fear day.’

The clinically vulnerable are instead being advised to wait three weeks after a second jab before meeting people in enclosed spaces, avoid getting close to unvaccinated people, ask friends and family to take lateral flow tests before visiting and do shopping online instead of in person.

MacMillan said the guidance left cancer patients fending for themselves at a time when they were ‘desperately worried about how they will stay safe’.

Steven McIntosh, executive director of advocacy and communications at the charity, said: ‘It is categorically unacceptable that people with cancer have been left to feel abandoned and unsafe, time and time again.

‘The Government must put the most vulnerable people first and deliver clear advice. We know many people living with cancer are desperately worried about how they will stay safe. You are not alone. If you’re worried please get in touch – Macmillan is here to support you.

‘It’s vital that the Government also ensures cancer care will be not be disrupted as it has been in previous peaks – the lessons of last winter cannot be ignored.

‘The Government must promise people living with cancer that NHS cancer care will get any and every resource necessary to ensure we don’t see any further increases to cancer backlogs or treatment waiting times.’

Disability equality charity Scope said the new guidance was an abdication of responsibility, leaving those most at risk relying on others to do the right thing.

Head of policy and campaigning Louise Rubin added: ‘This guidance will make many clinically extremely vulnerable people feel they are on their own, having to rely on others taking responsibility, and without the support to keep themselves safe.

Ms Rubin also questioned why the Government was taking away vital support when Prime Minister Boris Johnson has said the pandemic was not over.

‘Those most at risk have no concrete or consistent protections at work. Supermarket priority slots have been taken away. Furlough is due to come to an end,’ she said.

‘This guidance is essentially asking people to shield, without offering even the minimal support which has been available throughout the pandemic.’

Charity Blood Cancer UK chief executive also condemned the new guidance. with its chief executive Gemma Peters stating the Government had let down 500,000 people in clinically extremely vulnerable group who have compromised immune systems and for whom Covid vaccines will not be as effective.

‘If the Government thinks this constitutes adequate support for people with blood cancer at a time when many of them are hugely worried about the spread of the virus, I am afraid we can add it to the long list of times the Government has let them down,’ she said.

‘This guidance contains little by way of practical support for people with blood cancer as they try to keep safe over the difficult weeks ahead.’

Professor Adrian Hayday, an immunobiologist at King’s College London, said reducing restrictions next week would create a ‘prison of uncertainty’ for the clinically vulnerable.

Speaking to MPs today, he said: ‘I can’t understand the decision. To go to so called ‘Freedom Day’ at a time of such extraordinary transmission rates – it’s a de facto prison of uncertainty for millions of people.

‘This isn’t liberation at all. It’s just going to impose more and more constrictions.

‘You might actually provoke a winter wave by opening up now with such low vaccination rates, such are the uncertainties.

‘It’s not a shrewd gamble. In my view, it’s an unnecessary and inappropriate, self-inflicted harm.’

Professor Hayday added: ‘People who are clinically vulnerable should be encouraged to have the confidence to continue to wear masks when on a train when they’re the only person doing so.

‘They need to be given the confidence not to go down to the pub to celebrate ‘Freedom Day’ and we in society need to have the empathy to give them the confidence to do that.’

Just over 1,000 clinically vulnerable people took part in the ONS survey, which asked them about their behaviours and wellbeing between 21 and 26 June.

The data is part of a series of surveys the ONS has conducted since the start of 2021 on how the pandemic has impacted the lives of those asked to shield.

Shortly after the pandemic reached the UK those deemed most at risk from Covid were asked to shield on numerous occasions as cases rose.

The first was in March 2020 when Public Health England first urged those at particular risk from the virus to stay home and only leave for essential reasons.

This advice was then paused in August as cases number began to fall before being reintroduced in November hours before the nation went into lockdown.

People shielding were then advised in January to continue to do until they had been fully vaccinated.