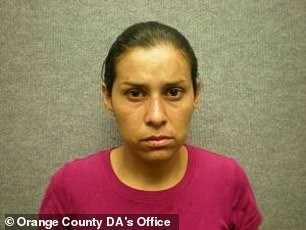 Sonia Hermosilla, 31, has remained jailed since the August 2011 crime

A California mother accused of dropping her disabled infant off a parking garage 10 years ago, killing him, went on trial this week, with prosecutors arguing that she resented him and the defense claiming mental illness.

‘(He’s sick) and that’s why I don’t love him’, police said Hermosillo told them following her August 2011 arrest. She ‘would rather he died,’ police said.

‘She didn’t look at our son as normal,’ he said of Noe Medina Jr.

But Hermosillo’s defense argues that the mother was in a state of psychosis at the time, and described her as a dedicated housewife and mom to Noe Jr. as well as their two daughters. 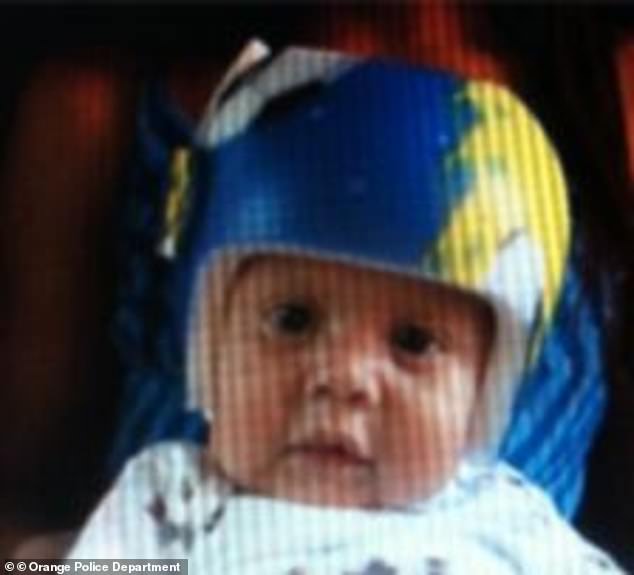 Noe Media Jr. was born with congenital muscular torticollis, which causes a twisting of the neck to one side. He wore a helmet to help correct his plagiocephaly

Noe Jr. was ‘in utero too long’ and born with congenital muscular torticollis, which causes a twisting of the neck to one side. The child wore a helmet to help correct his plagiocephaly, otherwise known as ‘flat-head syndrome,’ according to KFI AM.

At the time of his death, Noe Jr. was undergoing physical therapy twice a week and was showing signs of improvement, The Journal reports.

Police said Hermosillo arrived at Children’s Hospital of Orange County without an appointment then removed the child’s protective helmet before dropping him. The child fell three stories from the four-story parking garage. She then had her parking ticket validated and left the garage.

She pleaded not guilty by reason of insanity and has remained jailed since her arrest.

According to Guirguis, Hermasillo had been treated for mental illness prior to the child’s death, and was placed on a psychiatric hold.

‘But she was still able to intend to kill her son,’ he told jurors in his opening statement on Tuesday.

‘And she was able to follow through on that … It will be very clear that she intended to kill him and it’s going to be very clear she wanted him to die. You’ll hear that several times. Why? Because he was sick. His mother did not love him and she wanted to get rid of him.’

Hermosillo’s lawyer, Jacqueline Goodman, however, argued that her client never resented her disabled son, but rather felt he wasn’t safe with her.

She was suffering from ‘full-blown psychosis’ during interviews with police immediately after the crime, telling investigators that Noe Jr. would ‘always remain a baby,’ and even as an adult she would have needed to ‘change his diapers.’

Goodman said her client met her husband and father to her children in Mexico when the two were in their late teens.

Despite the fact that she had only a sixth-grade education, she said Hermosillo was a ‘remarkable’ homemaker who along with her husband, desperately wanted to have a son following the birth of their two daughters.

‘When Noe Jr. was born, there was something that went wrong and you’ll hear it was chemical. Sonia had become severely mentally ill.’ 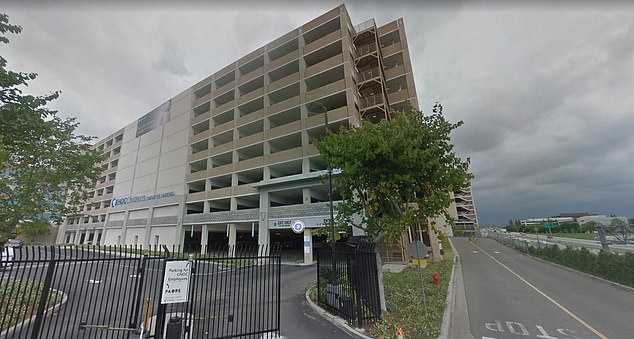 Pictured: the parking garage at the Children’s Hospital of Orange County, where prosecutors say Hermosillo dropped her disabled infant son from the third story

‘She stopped caring for her children,’ her attorney added. ‘She couldn’t even take care of herself.’

A witness who saw the infant dropped to his death, and a doctor who attempted to save the child’s life will testify during Hermosillo’s trial.

Hermosillo faces a minimum of 25 years in prison if convicted, or she could be sent to a state mental health hospital, according to KFI AM.