The late Sen. John McCain’s 2014 floor speech against the nomination of Secretary of State Antony Blinken to serve as deputy secretary of State has resurfaced amid the U.S.’s chaotic pull-out from Afghanistan.

The Arizona Republican came to the Senate floor on December 16, 2014 and told colleagues that he rarely spoke out publicly against a president’s nominee, but he considered Blinken ‘unqualified’ and ‘one of the worst selections of a very bad lot.’

‘In this case, this individual has actually been dangerous to America and to the young men and women who are fighting and serving it,’ McCain said, citing Blinken’s ideas about Afghanistan as a prime example. 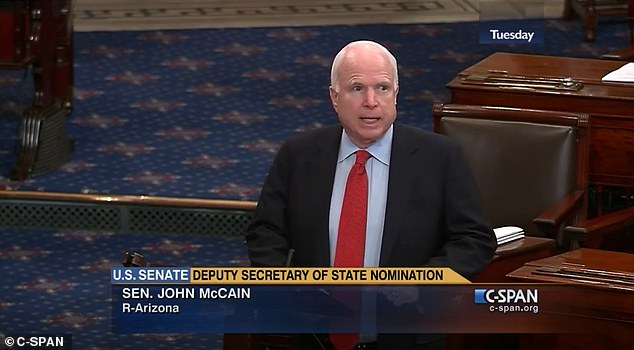 The late Sen. John McCain’s December 2014 floor speech against the nomination of Secretary of State Antony Blinken to serve as deputy secretary of State has resurfaced amid the U.S.’s chaotic pull-out from Afghanistan

Just days later, on December 29, 2014, Obama announced that the combat mission in Afghanistan was ending.

On the Senate floor McCain warned against there being a withdrawal from Afghanistan on a timetable.

‘This is why I’m so worried about him being in the position that he’s in,’ McCain said of Blinken.

‘Because if they stick to that timetable I am telling my colleagues that we will see the replay of Iraq all over again,’ McCain warned. ‘We must leave a stabilizing force behind of a few thousands troops, or we will see, again, what we saw in Iraq.’

McCain’s speech didn’t do enough to derail the nomination, with Blinken receiving Senate confirmation – in a vote of 55 to 38 – later that day.

Obama, however, did leave troops in Afghanistan.

In the December 29 release the Obama White House described the force as one that would ‘train, advise and assist Afghan forces and to conduct counterterrorism operations against the remnants of al Qaeda.’

Biden is being hammered for the rapid collapse of the Afghan government to the Taliban – the speed at which the president claims was unexpected – and for the mess at Kabul’s airport as westerners and Afghans have been trying to escape.

Among those bashing the strategy: McCain’s daughter Meghan, previously a co-host on The View.

‘Even if you thought leaving Afghanistan was the right decision -this is a reckless, dangerous, blundering, and embarrassing withdrawal,’ she tweeted Friday. ‘We left our translators, women, children, people who helped us for 20 years to be slaughtered & our president just called a lid until Wednesday.’

Biden was originally supposed to stay at Camp David until Wednesday, but came back to the White House several hours on Monday to address Afghanistan and then arrived fully back from his trip Tuesday night, a day early.

John McCain’s tough critique of Blinken isn’t surprising, however the Republican – who was on the presidential ballot against Obama in 2008 – has been lionized by the left since his August 2018 death.

McCain was the loudest ‘never Trumper’ on Capitol Hill and famously thumbed down the GOP’s bill that would repeal Obamacare, long a goal for Republicans.

McCain’s widow Cindy backed Biden’s election over Trump and was nominated to serve as the ambassador to the U.N.’s food program.