Mark McGowan refuses to even consider reopening Western Australia until two months after vaccination rates are as high as 90 per cent.

The premier showed no concern that this would separate families until as late as Easter next year, and even claimed to have the support of 95 per cent for four states.

Mr McGowan gloated that WA had not had a case of Covid since late June, ‘and when we did, it came in from Sydney’ on the Today show on Monday.

Described as a Covid-free ‘zealot’, Mr McGowan insisted vaccination rates in WA would need to be 80-90 per cent before he would consider opening the state to visitors from eastern seaboard states. 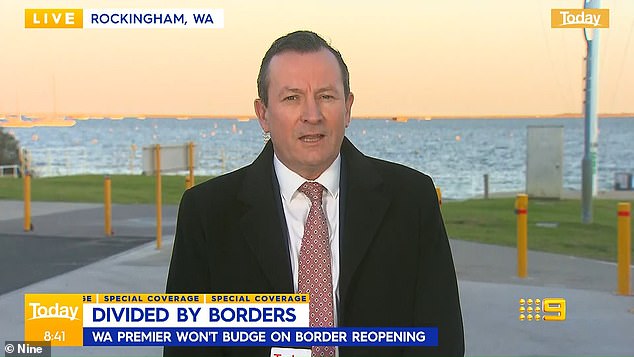 ‘Once we get to high levels of vaccination we will set a date to reopening to the Covid-infected states of NSW, Victoria and ACT… That may be two months from then,’ he said.

‘That will allow more people to get vaccinated and when it is safe to do so, we will open to those states.

Mr McGowan claimed that if the shoe was on the other foot, NSW and Victoria would refuse to let people from his state in.

‘I pose a question to those states. Imagine if it was the other way around and Western Australia was the infected case with thousands of cases and NSW or Victoria had none, would they really want to open to us? The answer I think would be no.’

His claim is dubious as NSW Premier Gladys Berejiklian has repeatedly committed to opening to Victoria at 80 per cent vaccination. 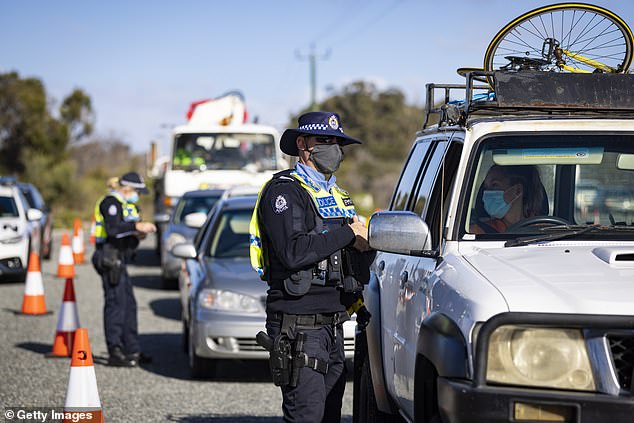 Police stop cars at a checkpoint north of Perth. West Australia has not had a case of community Covid transmission since late June 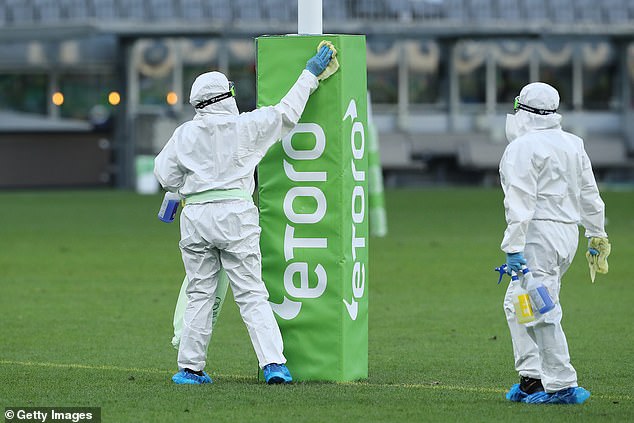 Mr McGowan claimed residents of other Covid-free states would also be happy to stay closed while they try to lift vaccination rates to around 90 per cent.

‘If we can get through this entire period, hopefully unscathed, and come out of it Covid free and have high levels of vaccination before we reopen,’ he said.

‘I think you will find that 95 per cent of West Australians and indeed South Australians, Northern Territory Territorians and Tasmanians would be happy with that.’

Mr McGowan would not deny that WA may remain closed until Easter next year when the date was put to him.

‘The better thing is, we all reunite when it is safe to do so,’ he replied.

‘We are used to this. Australia has been going through this for 19 months or so. Isn’t it better to remain Covid-free for as long as we can until we get high numbers of vaccination to achieve that outcome?’

He said his insistence on high vaccination rates was because his state didn’t get extra supplies of Covid vaccine like the eastern states with outbreaks.

‘Other states like ours and South Australia didn’t get that extra supply because we are Covid free,’ he complained.

‘Now, we supported NSW and indeed Victoria and Queensland getting extra supply above their per capita share because they had outbreaks.

‘So vaccinating people more quickly was the right thing to do, but we are going up by about 0.7 per cent each and every day.

‘As more supply comes on, we will put in place more measures to get more people vaccinated as quickly as we possibly can.’

The WA Premier ridiculed comments by Federal Treasurer Josh Frydenberg, who said Mr McGowan’s hardline stance on border closures would mean Australians would be able to travel to Canada before they can travel to Perth.

‘I am more worried about getting the virus under control in New South Wales, Victoria and the ACT and also keeping our people safe, as to when I can fly to British Columbia.

‘That seems to me to be a secondary consideration.’

Mr McGowan’s view on closure of the border flies in the face of Prime Minister Scott Morrison’s claim that Australia must fully re-open by Christmas, saying last week that ‘holding onto COVID zero will only hold Australians back as the world moves forward’.

‘Nobody wants COVID to be the virus that stole Christmas, and we have a plan and the vaccinations available to ensure that’s not the case,’ he told the Herald Sun. 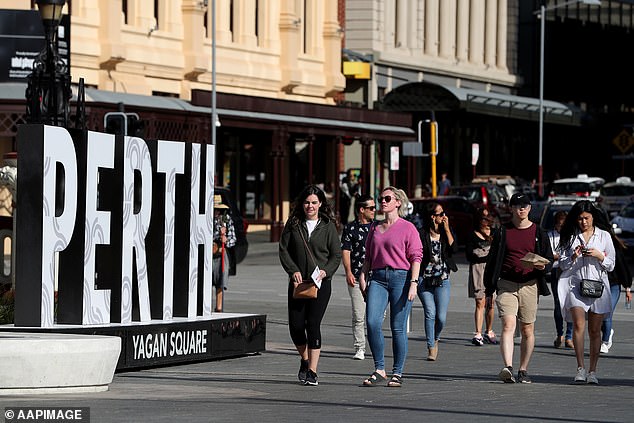 People walk near Yagan Square, Perth without masks. WA Premier Mark McGowan did not disagree when asked whether the state may be closed to other parts of Australia until Easter 2022

Mr McGowan mentioned his oft-repeated claim that WA’s large mining industry is helping support eastern states, including as they deal with Covid lockdowns.

‘I mean, 60 percent of Australia’s exports come out of Western Australia,’ he said.

‘That is about 230 billion dollars’ worth of exports each and every year and all the revenue that generates goes to the Commonwealth, which then is able to be sent to New South Wales and Victorian support packages.

‘So, whilst we remain COVID free in this state, we’re providing that massive economic support to the rest of the country, which I think is actually a very good thing.’

Perth is set to host this year’s AFL Grand Final due to its Covid-free status and Victoria’s ongoing battle to get community transmission under control.

The city hosted the third Bledisloe Cup match between the Wallabies and the All Blacks on Sunday, with 55,000 fans in attendance.