Coronavirus cases are continuing to rise across the U.S. but the rate of infections is showing signs of slowing, which could mean that the fourth wave of the pandemic is coming to an end.

On Tuesday, officials recorded 261,683 new cases of COVID-19 with a seven-day rolling average of 154,553,  according to data from Johns Hopkins University.

This means that although the overall number of infections has risen, the growth rate of new cases has significantly slowed to the lowest since early July.

New cases increased 90 percent from the 137,058 average reported three weeks ago, about two-thirds the seven-day rolling average spike of 269 percent reported on August 17.

Nearly half of U.S. states have seen Covid infections either decline or hold steady over the last week, a DailyMail.com analysis of the data shows.

The pace of the rise in deaths has also fallen, even as the overall number increases.

A total of 1,513 virus-related fatalities were recorded on Tuesday with a seven-day rolling average, which is a 107 percent of the 710 average reported on August 17.

This is less than the 186 percent growth in the seven-day rolling average of Covid deaths seen three weeks prior.

It comes as public health experts warn that a surge of infections could follow Labor Day weekend after people attended large events celebrating the end of summer and the new school year. 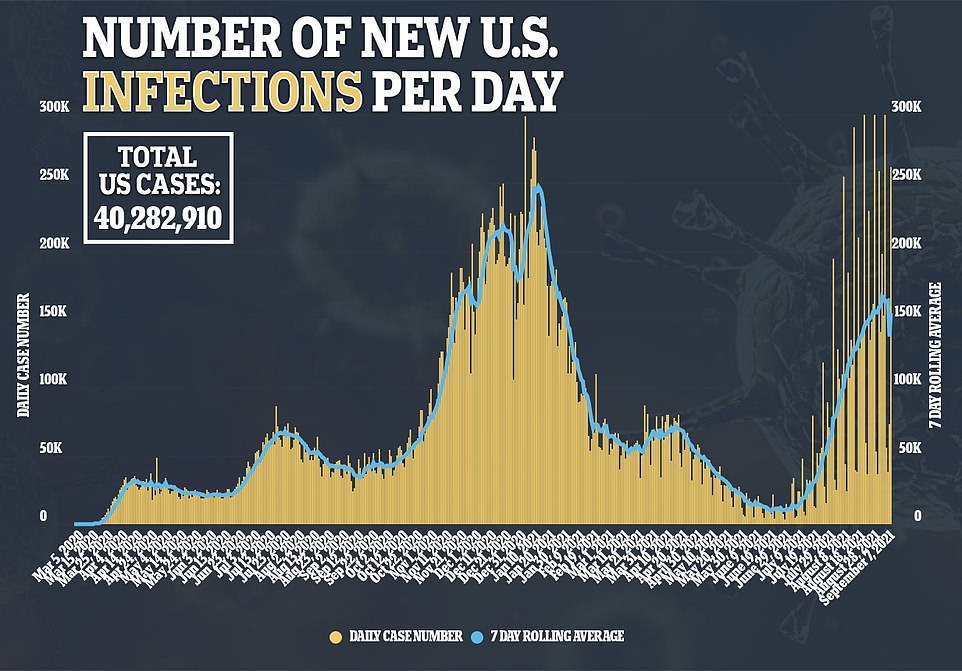 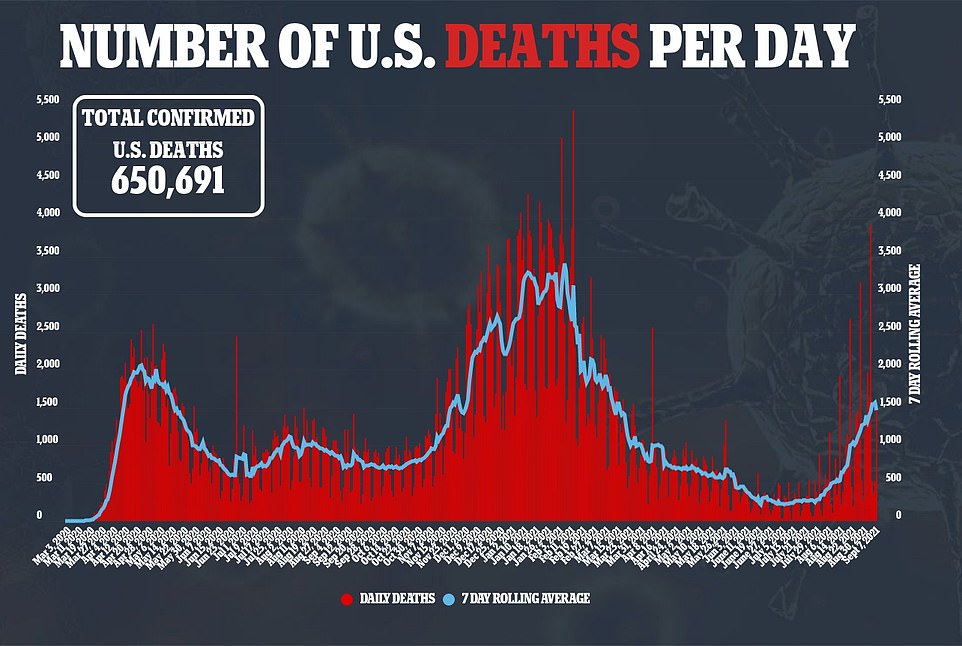 On Tuesday, 1,513 virus-related deaths were recorded with a seven-day rolling average, a 107% increase from the 710 average three weeks prior, which is a also a drop in the growth rate 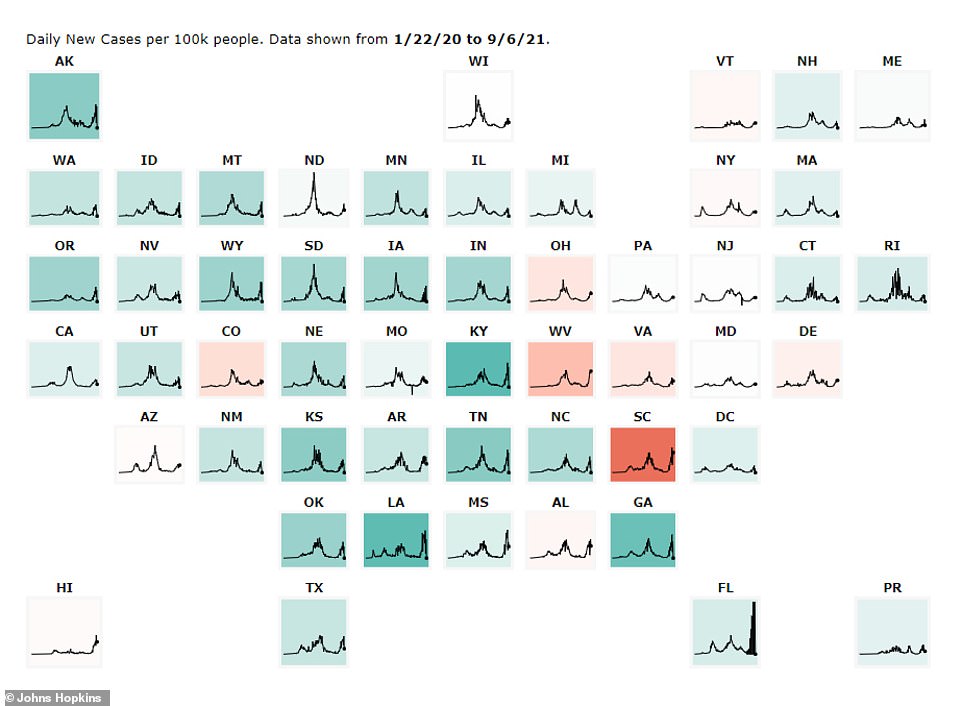 Nearly half of U.S. states have seen Covid infections either decline or hold steady over the last week

‘What I see is a tension that’s going on, this great desire for people to get back to normal or near-normal activities which is, of course, understandable after a year and a half of hunkering down,’ Dr William Schaffner, a professor of preventative medicine at Vanderbilt University Medical Center, told WKRN.

‘At the same time we see this invisible virus highly contagious still spreading in our communities, stressing hospitals intensive care units and increasingly even reaching down into the pediatric population and hospitalizing children.’

A report from the American Academy of Pediatrics found that more than 250,000 children tested positive for the virus last week, the highest number since the pandemic began.

What’s more, more than 2,200 children are currently hospitalized with the virus, a record-high, according to data from the Department of Health and Human Services.

However, most kids do not contract severe or critical cases of COVID-19 and pediatric deaths make up 0.1 percent of all COVID-19 deaths in the U.S.

Although 75 percent of all U.S. adults have received at least one dose, doctors fear that another surge could be on the horizon.

‘I actually expect two weeks down the road here and there we’re going to have further bursts of Covid infection because of exposures that happened on this labor day weekend,’ Schaffner told WKRN. 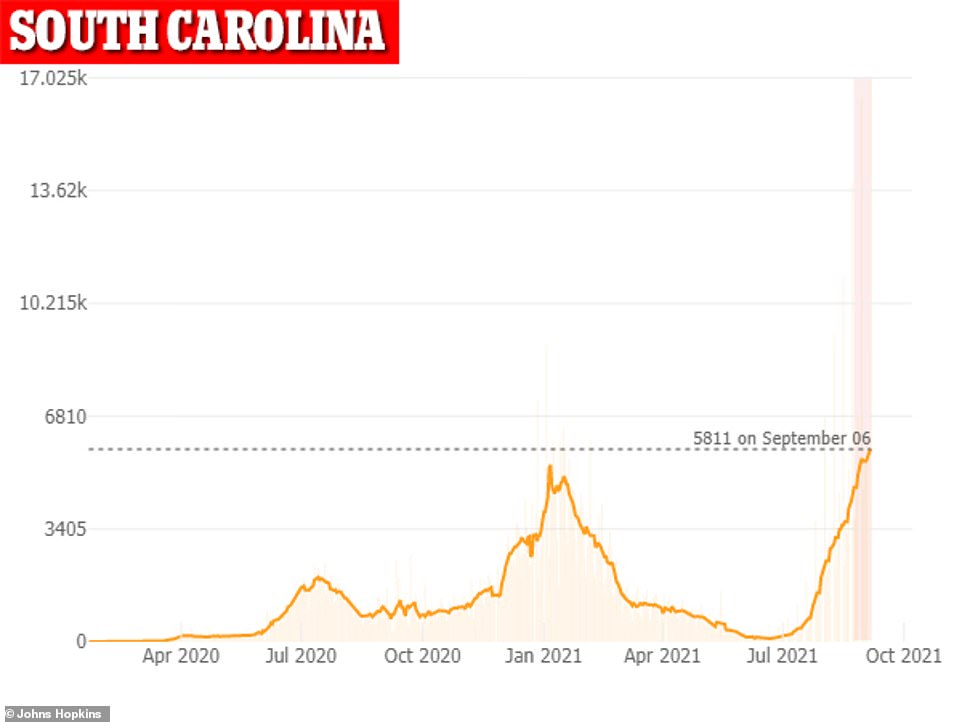 In South Carolina, cases have continued to increase with a seven-day rolling average of 5,811, a 105% increase from the 2,831 average reported last month 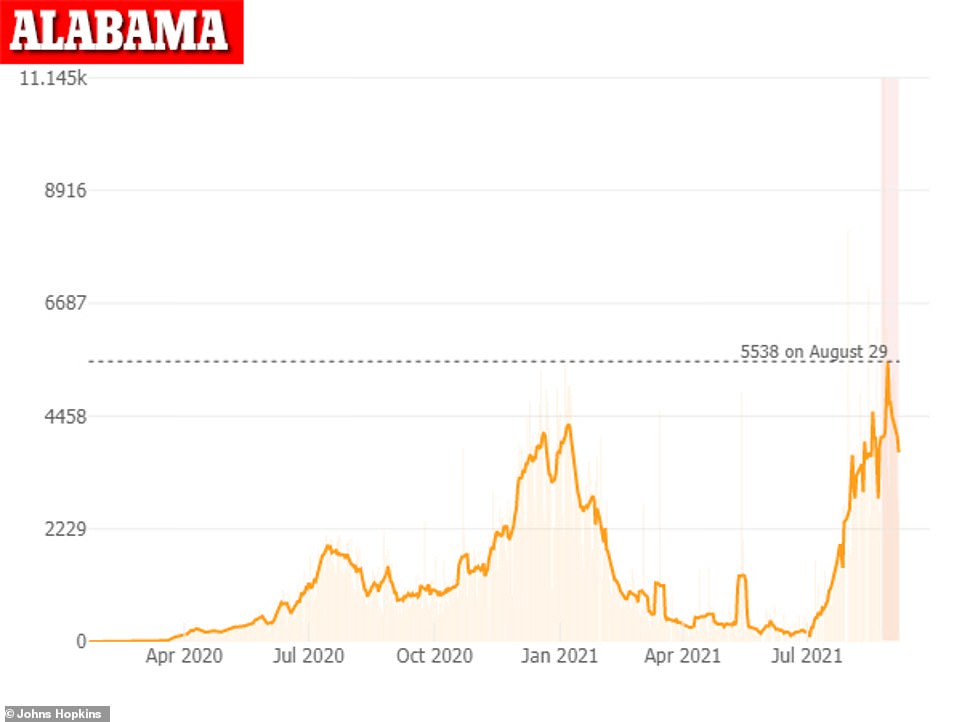 In Alabama, the seven-day rolling average of cases currently sits at 3,125, lower than the record-high 5,538 seen on August 29 but an increase from the average of 3,000 seen at the beginning of August

In South Carolina, cases have continued to increase with a seven-day rolling average of 5,811, the highest number since the pandemic began, according to data from Johns Hopkins.

Pediatric cases are also rising in South Carolina with more than 17,000 kids under age 10 were diagnosed in the first six weeks of the school year, reported The State.

In 2020, just 1,142 kids contracted the virus during the first six weeks of the school year.

Most cases have been mild or asymptomatic with 33 children hospitalized and 17 of those in intensive care units, according to a post from the South Carolina Children’s Hospital Collaborative, which collects data from four children’s hospitals in the state.

However, these are higher than the numbers seen since the pandemic began.

‘We have the most children we’ve ever had in our ICUs due to COVID,’ Dr Caughman Taylor, senior medical director at Prisma Health Children’s Hospital–Midlands in Columbia, told The State.

‘We have had five weeks of our ICU being at 100 percent capacity with [pediatric intensive care unit] holds in our [emergency department] except for two nights. That is unprecedented. Even in the worst flu seasons, we never went more than four or five days in a situation like that.’ 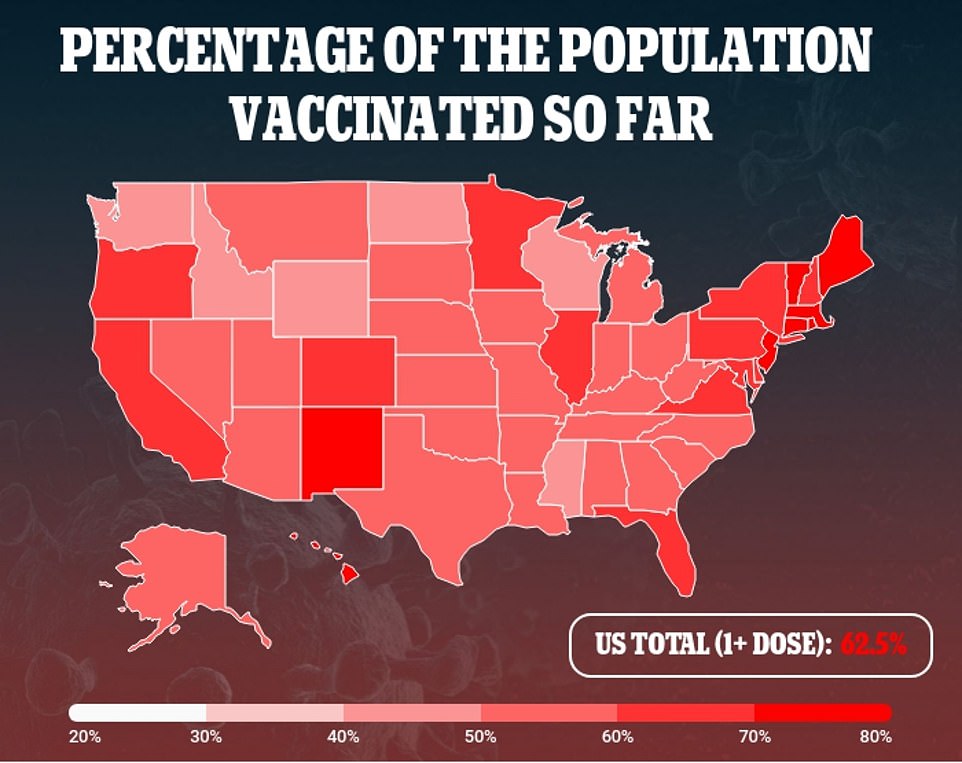 In nearby Alabama, the seven-day rolling average of cases currently sits at 3,125.

It’s lower than the record-high 5,538 seen on August 29 but also an increase – albeit slight – from the average of 3,000 seen at the beginning of August.

Health experts say they are worried that COVID-19 infections will rise rapidly in the Cotton State following Labor Day weekend as they did after Fourth of July weekend.

‘And it’s possible that we may be seeing a little bit of plateauing there, but overall I’ve just learned I’m not really good at predicting what we’re going to see.’

What’s more, Alabama is welcoming back college football with stadiums now allowing fans to attend games. Harris warns spectators to be careful, even if they are fully vaccinated.

‘I sound like a broken record, but our advice is the same,’ he told the station.

‘If you’re a vulnerable person, if you’re a senior, if you’re somebody with chronic health problems, even if you’re vaccinated, you need to be really careful about getting together with large groups of people.’ 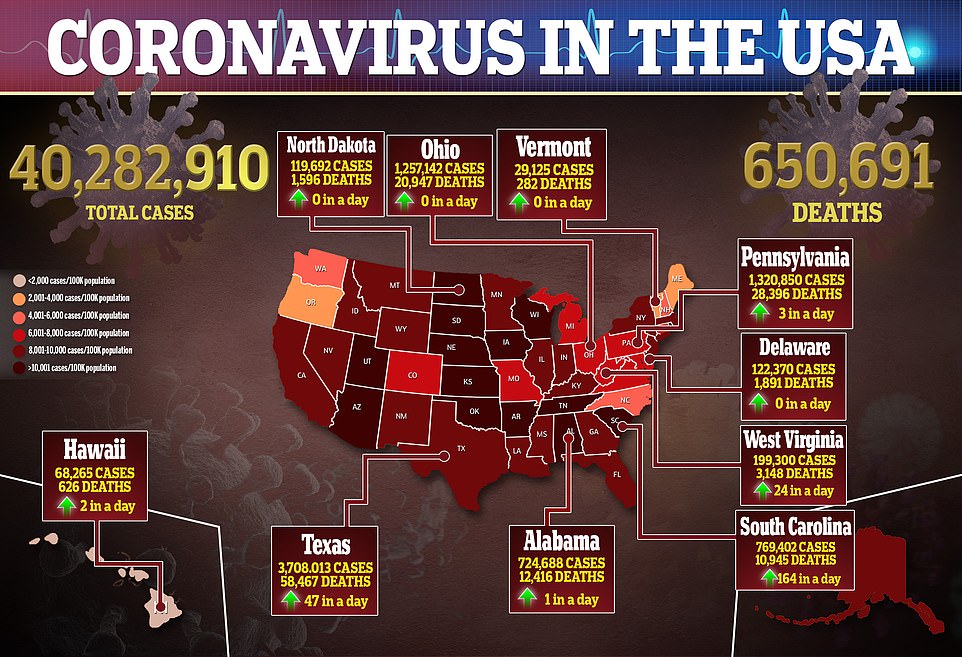