The Joe Biden I see today is not a man I any longer recognize. Nor does he represent the campaign so many Americans bought into as a clear alternative to Donald Trump’s administration.

As a candidate, Biden campaigned as a ‘return to normalcy’ and emphasized his decades of political experience to send a message that he would be a steady hand.

He beat out more than twenty-five other candidates – including some of the most progressive, radical and proudly socialist candidates in the Democratic Party 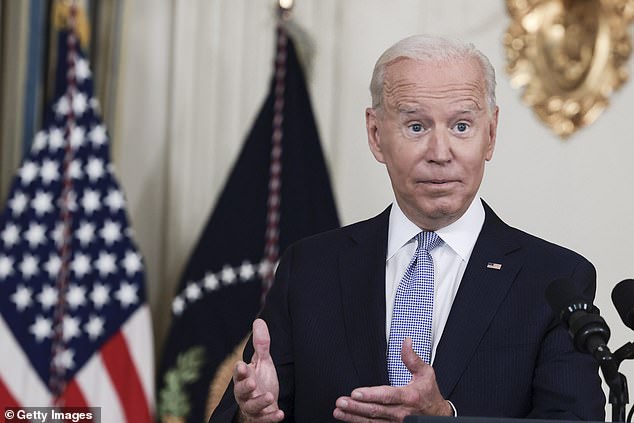 UNDER PRESSURE: If Biden started actively sending migrants home, he would offend The Squad and their progressive constituencies whose wrath seems to terrify him. 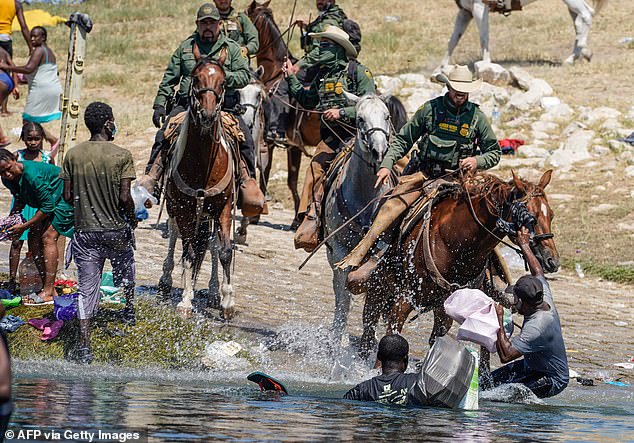 HEAVILY CRITICIZED: Biden has threatened US Border Patrol Agents just for doing their jobs – despite it NOT being clear is they were even using their whips against the migrants

Today Biden gives all the signs of having totally forgotten who and what got him to the White House. His policies and his messages are not signs of unity and moderation but of stubborn progressivism.

His poll numbers are dropping significantly, and if he isn’t careful he will lose the moderates, independents, and Trump-wary Republicans who elected him by placating eight extremely powerful members of the squad.

The Squad is not what got Joe Biden to 1600 Pennsylvania Avenue, and they represent a radical, loud but extremely small minority of the voting public. So why is he placating them?

The focus of Washington this week was on attempt to deny promised Iron Dome funding for Israel. In the event it was a rare and crushing defeat for the Squad which led to New York Rep. Alexandria Ocasio-Cortez openly weeping on the floor of the House.

But nowhere do we see Biden’s deferral to the Squad more clearly than on border policy.

So far this administration’s reaction to soaring numbers of desperate migrants pitching up on the southern border since they got into office has been appointing Vice President Kamala Harris immigration ‘Tsar’ and sending her and DHS Secretary Alejandro Mayorkas out to tell immigrants ‘Do Not Come’. 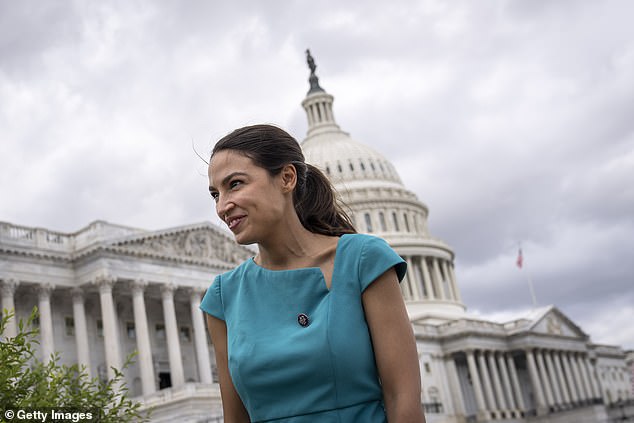 Tail wagging the dog: AOC and her Squad allies are feared by Biden and are pushing his border policy debacle

Sadly it turns out telling migrants not to come when you don’t actually mean it doesn’t seem to work. Which is why they keep coming.

The message migrants hear is the one President Biden and Vice President Harris sent when they raised their hands on the campaign debate stage agreeing that all undocumented immigrants should receive healthcare in this country.

For many around the world, it is worth the gamble on the Biden administration to attempt to come into the country. Haiti is the current heart-rending example where thousands of arrivals have turned a corner of Texas into a hell every bit as squalid as the benighted country they are trying to escape.

It’s especially tragic for the Haitians who had already escaped their crime-ridden island for the relative safety of South and Central America and were tempted by Biden to trade-up for a new home in the United States.

Because suspending repatriation flights for Hatians is effectively an open invite. What did they expect would happen?

The simplest answer is almost always the correct one. And one can only assume it’s because the White House does not actually want to do anything to stem mass illegal migration.

Beyond building ever-more elaborate border defenses that will never really work, the only effective deterrent to migrants is the knowledge that even if they do set foot on US soil they will be deported.

But if Biden started actively sending migrants home, he would offend The Squad and their progressive constituencies whose wrath seems to terrify him.

And it seems that ultimately has shown to be more important to Biden than the independents and moderates in places like South Carolina and Arizona who got him where he is.

Last I checked we are still in the midst of a global pandemic, and these migrants are not being tested for Covid, let alone vaccinated. Their impact on communities thousands of miles beyond the border is disruptive to jobs, housing, and welfare policies, and these surges send a message of lawlessness and lack of control and security on our border in a dangerous time. No wonder people believe the worst.

One of my most vivid memories growing up around politics was attending a town hall in Iowa where a furious man asked about a so called ‘universal highway’, an internet rumor about a fantasy highway coming from Mexico, up through the United States and through Canada. 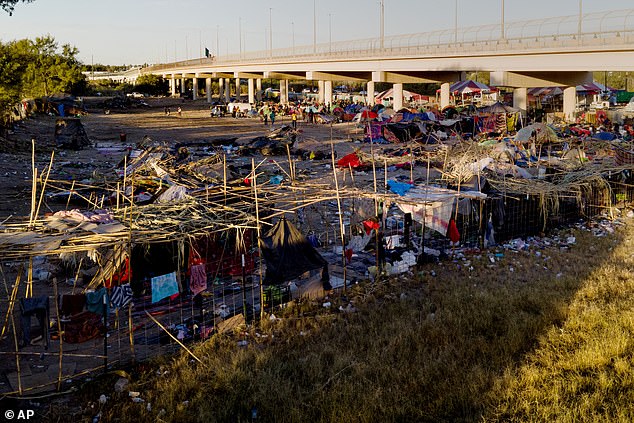 Left to rot: Nearly 15,000 Haitians have spent the past two weeks living in disgusting and disease-ridden conditions under the Del Rio bridge

The implication being that there would be a highway in which migrants could jump on and get off at any point in the United States. I have never forgotten the fear and anger in his voice. The universal highway is a bizarre urban legend spread on the internet to vulnerable voters.

What isn’t a fantasy is how deeply and intensely many voters fear and are against any idea of amnesty and open borders. President Trump ran on building the wall and although that is in many places a pipe dream, the message that he was committed to immigration policies that would at long last secure our southern border was not – and it is arguably one of the biggest messages that got him into the White House.

Now he has gone and it is Joe Biden’s turn.

‘You campaign in poetry, you govern in prose’ is an old political adage. President Biden certainly campaigned in poetry when it came to immigration reform and his overall approach to what every rational thinking person can agree is a difficult and heart wrench situation no matter what side of the immigration issue you fall on.

But, translated into prose, his rhetorical poetry has become an open borders policy. The result are the scenes of misery under the Del Rio International Bridge that shame America.

But what shames the White House? Not the fact that the Biden administration precipitated this crisis.

No, for the past several days the entire focus of the White House and its cheerleaders in the liberal media has to been to demonize the Border Patrol attempting to bring order the chaos they have created.

Yes, the pictures of agents on horseback forcing back migrants are upsetting. Although the Border Patrol and many experienced horse-people say the idea that they were whipping them with their reins counts as what normally comes out of the rear of their animals.

Not that Biden cares less. This week Jen Psaki said Border Patrol won’t be able to use horses any more. That’s the definition of unserious and irresponsible. No horses? Great solution, Jen.

And this morning the President gravely promised ‘consequences’ for the ‘rough treatment’. But none for policy failures that put the Border Patrol and 15,000 migrants in each other’s paths 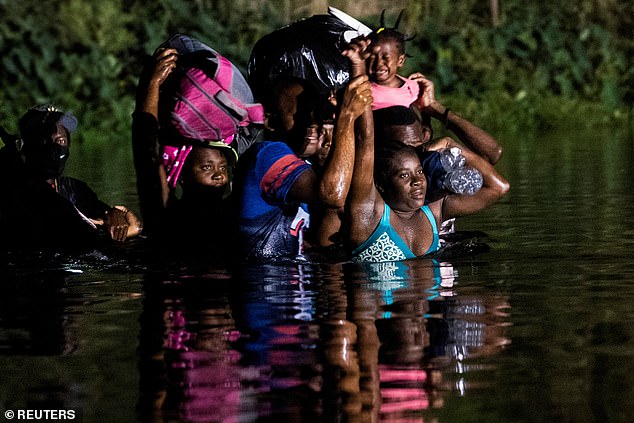 Biden’s failure: Biden’s rhetorical poetry has become an open borders policy. The result are the scenes of misery under the Del Rio International Bridge that shame America.

What does HE have to say to the people who have risked their lives and the lives of their families seeking asylum in the United States because they took him at his campaign words? What about the policies and signals that inspired them to come here?

It’s not fair to the migrants to say ‘don’t come’ when you don’t really mean it. To encourage them to undertake these dangerous journeys put their lives and the lives of their families in imminent danger and beholden to the cartels. To endure terrible conditions, risk their lives and then send some home but not others, seemingly at random based on color-codes wristbands.

Like the Afghanistan fiasco, this is a lose, lose, lose situation for President Biden. A new Pew Research survey says there has been a 13 percentage point decline in the share of Democrats and Democrat- leaning independents who approve of Biden’s performance. His overall approval has sunk to 44%.

As in so many areas, the what matters to this White House is not enforcing policy but signalling the right virtues to the Squad and their media allies.

What they don’t care about are the migrants, the men and women we ask to police a now-chaotic and inconsistent immigration policy or the millions of American citizens from all communities who have will have to live with the consequences.