The US corporation behind fertiliser giant CF Industries handed shareholders almost £50million just weeks before it accepted a British taxpayer-funded subsidy worth ‘tens of millions’ of pounds, The Mail on Sunday can reveal.

UK Ministers stepped in after the firm stopped making industrial carbon dioxide (CO2) following a sudden rise in the price of natural gas.

The firm produces around 60 per cent of UK’s industrial CO2as a byproduct of fertiliser manufacture. The gas is used primarily by the food sector, where it is injected into the packaging of perishable foods, such as meat and salad, to inhibit bacterial growth. 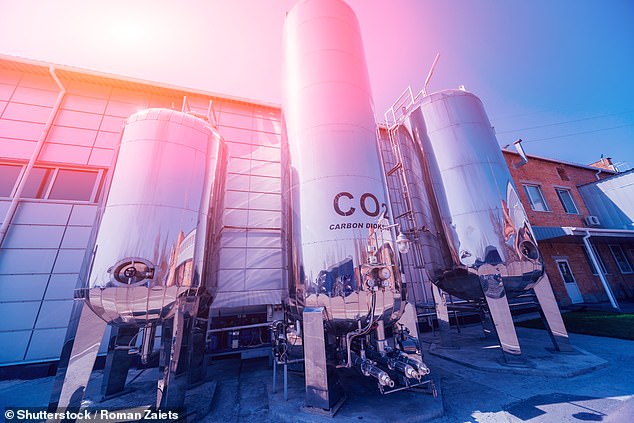 The Government said on Tuesday that the agreement would ‘ensure the continued supply of CO2’, which it described as ‘an essential component of the national economy’.

The deal, details of which have been kept secret, was hailed as an ‘exceptional, short-term agreement’ with the US firm to cover a three-week period that would see taxpayers’ cash used to provide ‘limited financial support’.

George Eustice, the Environment Secretary, admitted the cost was likely to rise to many millions and ‘possibly tens of millions’.

However, documents seen by The Mail on Sunday show that just a month before the deal was brokered, CF Industries said it would make a $65million (£47.4million) payment to its investors – who include chief executive Tony Will, who owns 488,789 shares. A further payment is due to be made to shareholders in the next two months.

The company, which is listed in the US and is worth $12billion, was approached by phone and by email on the matter. But it did not respond to questions on whether it thought accepting UK taxpayer money was appropriate in light of the shareholder handouts or whether the UK contribution would be paid back.

It closed production at its Cheshire and Teesside plants after a rise in gas prices made fertiliser production uneconomical. The crunch in CO2 production prompted fears that products from food suppliers already facing shortages may disappear from shelves altogether.

The firm – which employs 20 per cent of its staff in the UK – will restart production at its Billingham complex in Teesside, where it has a dedicated CO2 plant, until alternative supplies can be found.

A food industry commentator said last week that it ‘can’t be right that a company whose products are so critical to the food and drink supply chain can be allowed to close without adequate warning’.

But Will told the Financial Times he had been ‘completely unaware’ how critical the firm’s CO2 production was to the UK food industry.