Foreign lorry drivers say they will refuse the £4,000-a-month pay packet being offered if they return to the UK to drive tankers and trucks unless they are allowed to work in Britain for at least a year.

Jakub Borzykowski, who was born in Poland but lives in Germany, said that Boris Johnson’s offer of a three-month visa would not give him or other HGV drivers the security they need to move.

Other EU-based lorry drivers have also said they are turning £2,000-a-month more than they earn now while yesterday a left-wing Dutch HGV union boss said his members won’t go to Britain to clear up the ‘s**t they created themselves’ – a nod to the decision to leave the EU.

The Government announced over the weekend that 5,000 temporary visas will be made available to foreign HGV drivers to drive in the UK until Christmas Eve – but even backbench Tories have said it is not the answer, saying that ministers must improve conditions and the ‘standing in society’ of truckers.

Petrol pumps have run dry and supermarket chains and restaurants have been hit by the shortage of HGV drivers. The Road Haulage Association says it is short of 100,000 drivers and believes around 20,000 have left because of Brexit. Covid has also seen huge numbers return home.

Mr Borzykowski told ITV News: ‘I don’t want to work on a temporary visa because I think of the future. If the government offers a 12-month visa, I could plan for my life, but three months is not an option. I’d collect about £12,000 for three months. What next?’

French HGV driver Samuel Henri said: “When you see what happened with Covid, when people were stuck at border crossings with the UK for days on end – I’ve got no interest in that. I’ve got a family and there’s just too many complications’, adding: ‘I’m fine to go to Switzerland, to Germany, but the UK? No way’. 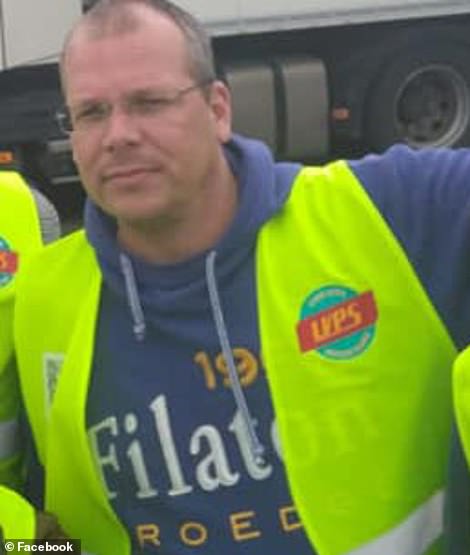 Jakub Borzykowski, who was born in Poland but lives in Germany, said that Boris Johnson’s offer of a three-month visa would not give him or other HGV drivers the security they need to move. Edwin Atema, Head of enforcement and research at the Dutch-based FNV union, dismissed the idea his members would go back 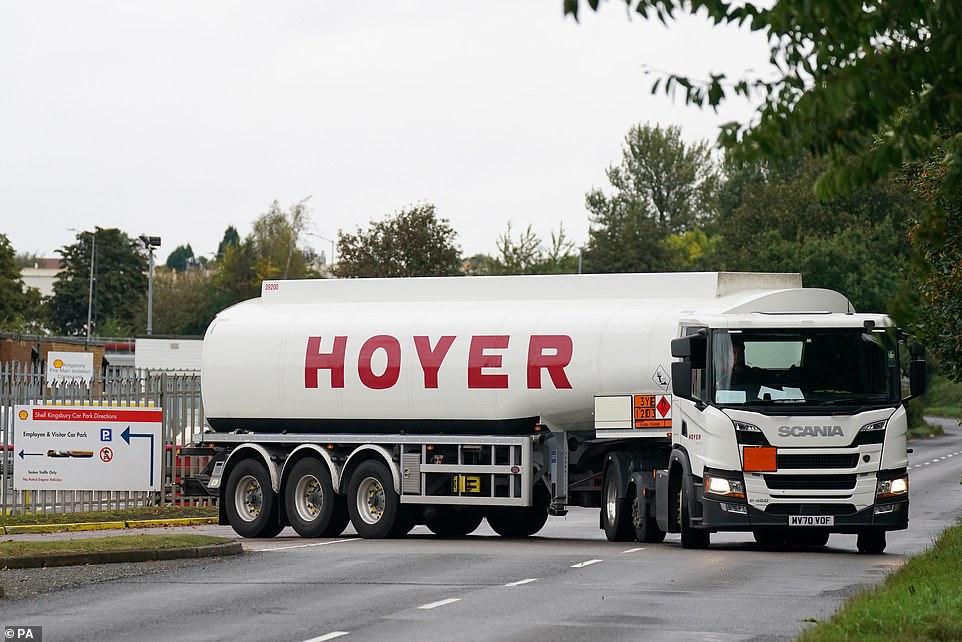 Lorry drivers from the EU are refusing to come to the UK – because they believe problems plaguing the supply chain are Britain’s own fault. 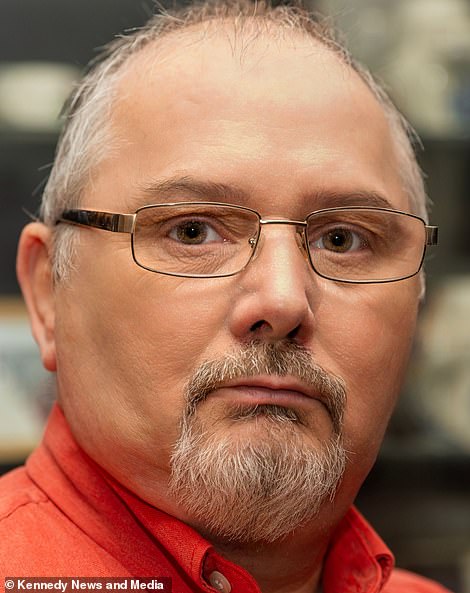 Former lorry driver Jim Titheridge, from Canterbury, Kent, said hauiiers were treated as ‘lepers of society’ so left the industry

The Government has approved plans to bring in 5,000 foreign HGV operators to deal with the shortage, which has been blamed on a number of factors including the coronavirus pandemic and Brexit.

But promises of special visas and attractive pay – with some firms offering as much as £78,000 a year – have fallen on deaf ears, with one union boss declaring they ‘will not go to the UK for a short term visa to help UK out of the s**t they created themselves’.

And lorry drivers in this country are as equally disillusioned, with one who gave up the job after 30 years, likening they way they are treated ‘to being the lepers of society’.

Edwin Atema, Head of enforcement and research at the Dutch-based FNV union, which represents drivers across the EU and Europe said the UK had an enormous battle on its hands to woo foreign drivers back.

He said: ‘Pay is an important area but not the only area. People in Europe and across Europe have completely lost trust in this industry.

‘Before the coronavirus crisis and Brexit this industry was sick already. Plagued by expectation, by irresponsible multinationals who drag down prices, which ended up with drivers voting with their feet and leaving the industry.

‘The EU workers that we speak to will not go to the UK for a short term visa to help UK out of the s**t they created themselves.’

The shortages have seen chaos on the streets as motorists block them queuing to try and fill their tanks with petrol.

The shortages and painful queues for the pumps are expected to last for the rest of the week but one of Boris Johnson’s most senior ministers today insisted that the Army would not be brought in to ease the crisis. 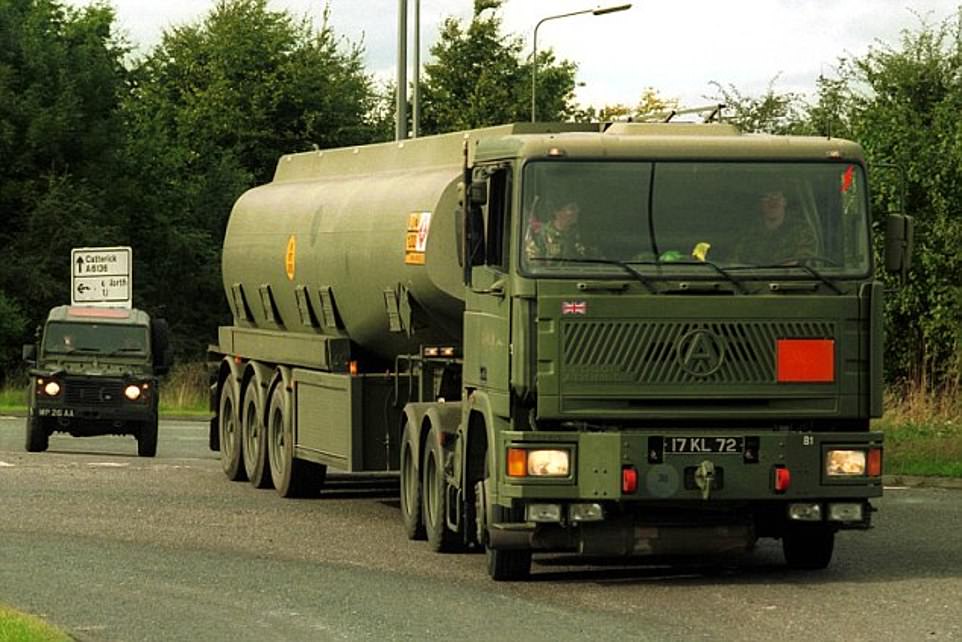 The move to mobilise the army comes after a widespread shortage of truck drivers, which has led to serious supply problems for retailers and restaurants in the past few months, has meant plentiful stocks of fuel have not reached filling stations (pictured: Army tanker in 2000 amid a previous crisis)

A driver pulled a knife on a motorist and was then run over in ‘Wild West’ scenes at the pumps as Britain’s fuel crisis shows no sign of abating today as drivers again queued through the night outside petrol stations.

Motorists reported queues at 11pm, 3am and 5.30am across the UK as the Government was accused of being ‘asleep at the wheel’ and critics questioned claims within Whitehall that the crisis will be over within two to three days.

Amid widespread scenes of enormous queueing across Britain’s forecourts, footage emerged of a man holding what appears to be a knife shouting at a driver outside a petrol station in Welling, south east London. The video then shows the car ramming into the alleged knifeman, who is then carried for several yards on the bonnet.

Met Police say officers had been called at 2.37pm on Monday to a disturbance in Bellegrove Road, Welling, but ‘no trace’ of either vehicle was found. No injuries were reported and no suspects have been identified.

And it is proving so difficult to get fuel, thieves have been siphoning it from cars, sometimes drilling into the petrol tank, Shadrack Olaloko, from Birmingham, said: ‘What these guys did was they came and drained out all my fuel in the tank’.

Such is the panic at the pumps, hundreds more people than usual have been filling up on the wrong fuel. Around 250 flustered drivers have had to be rescued by the AA’s specialist ‘fuel assist’ team on Saturday and Sunday – compared to around 20 in normal circumstances.

The Government is putting the military on standby after a widespread shortage of truck drivers, which has led to serious supply problems for retailers and restaurants in the past few months, meaning plentiful stocks of fuel have not reached filling stations.

But critics have said Boris Johnson has known for months that there is a lack of HGV drivers but ministers have had had their ‘heads in the sand’. The Prime Minister has 150 soldiers ready to drive tankers but they will not be brought in yet with one Government source telling The Times: ‘We believe that the crisis will recede in the next few days’.

Danny Altmann, professor of immunology at Imperial College London, said Britain’s petrol stations had becoming the “Wild West” after he queued for fuel only for it to sell out before everyone got to the pumps. He said: ‘Man behind me was furious and started punching the guard’, adding it ‘became a melee of 8-10 men on the ground, punching and kicking’. 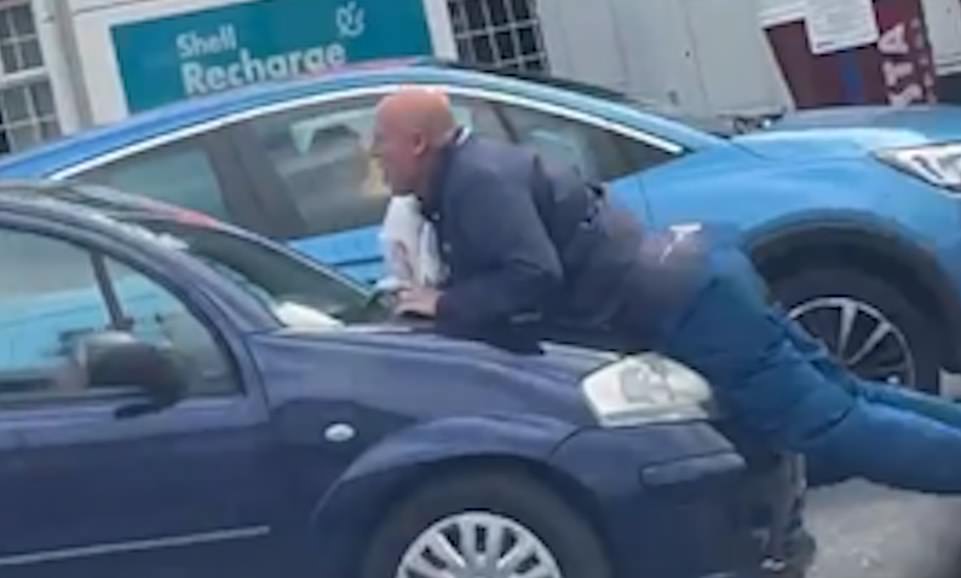 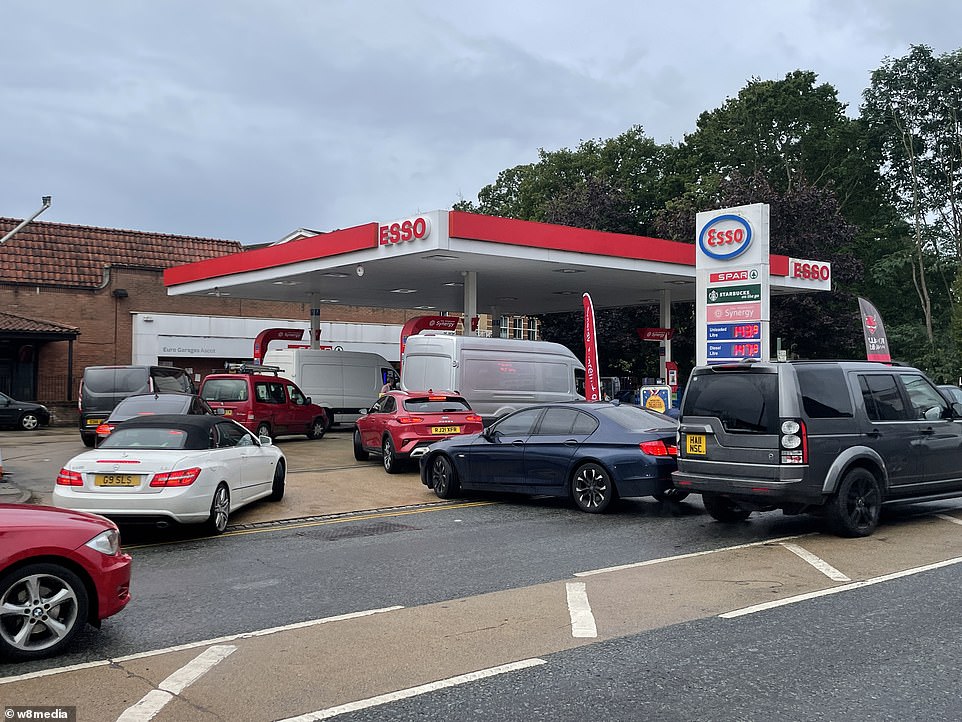 Ascot high street is blocked with cars quitting to get petrol at one of the only fuel stations in the area. Customers are limited to £30 per car 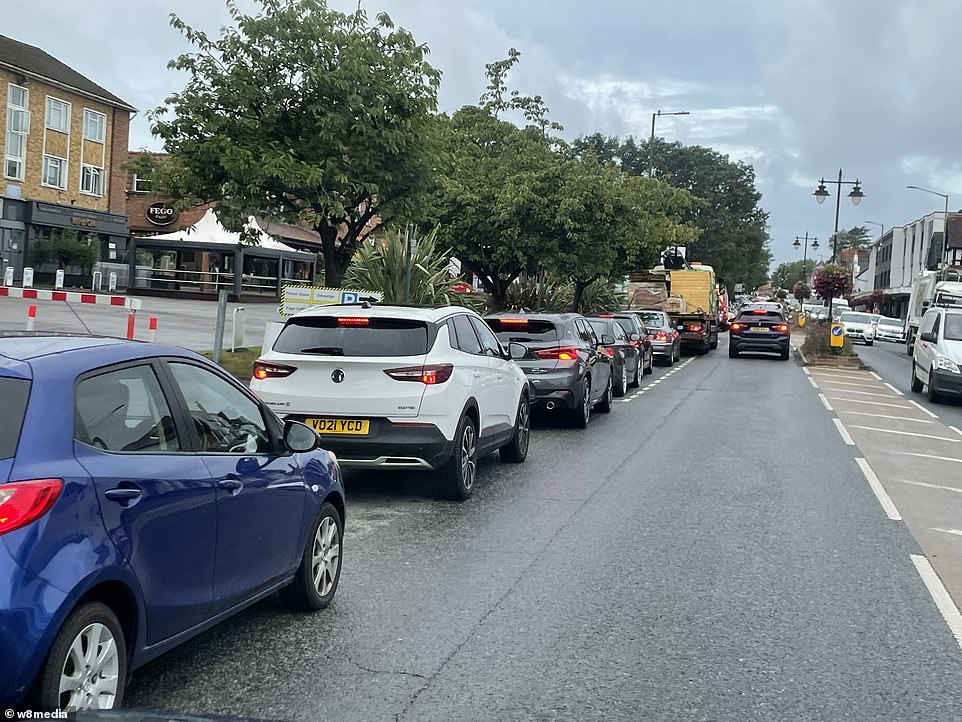 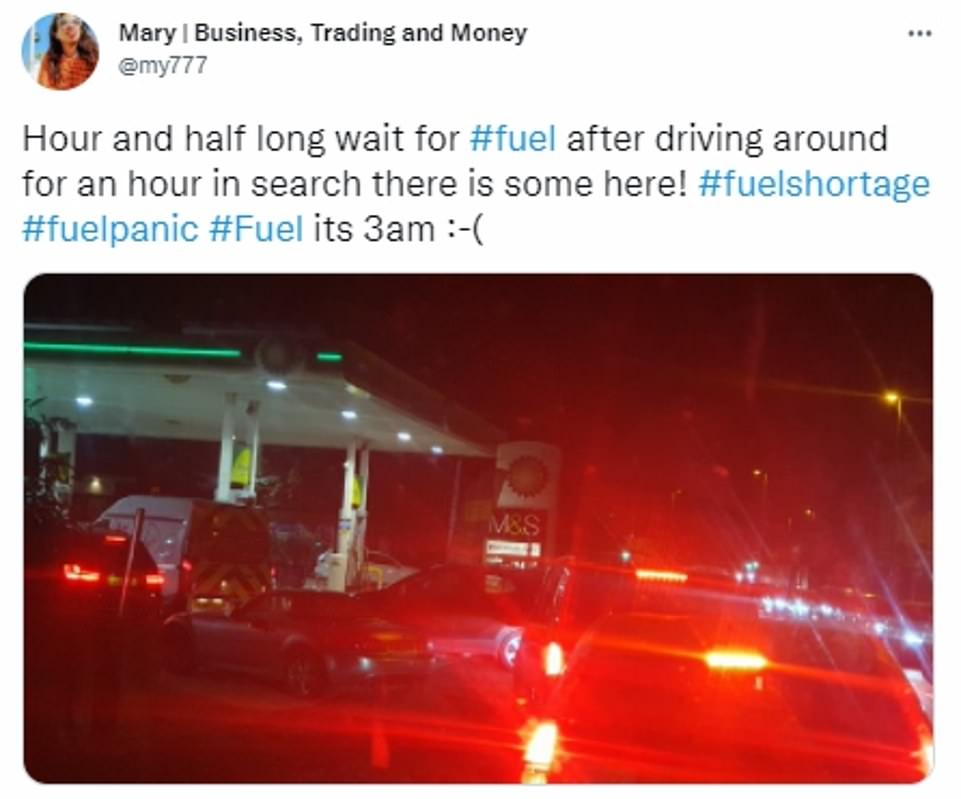 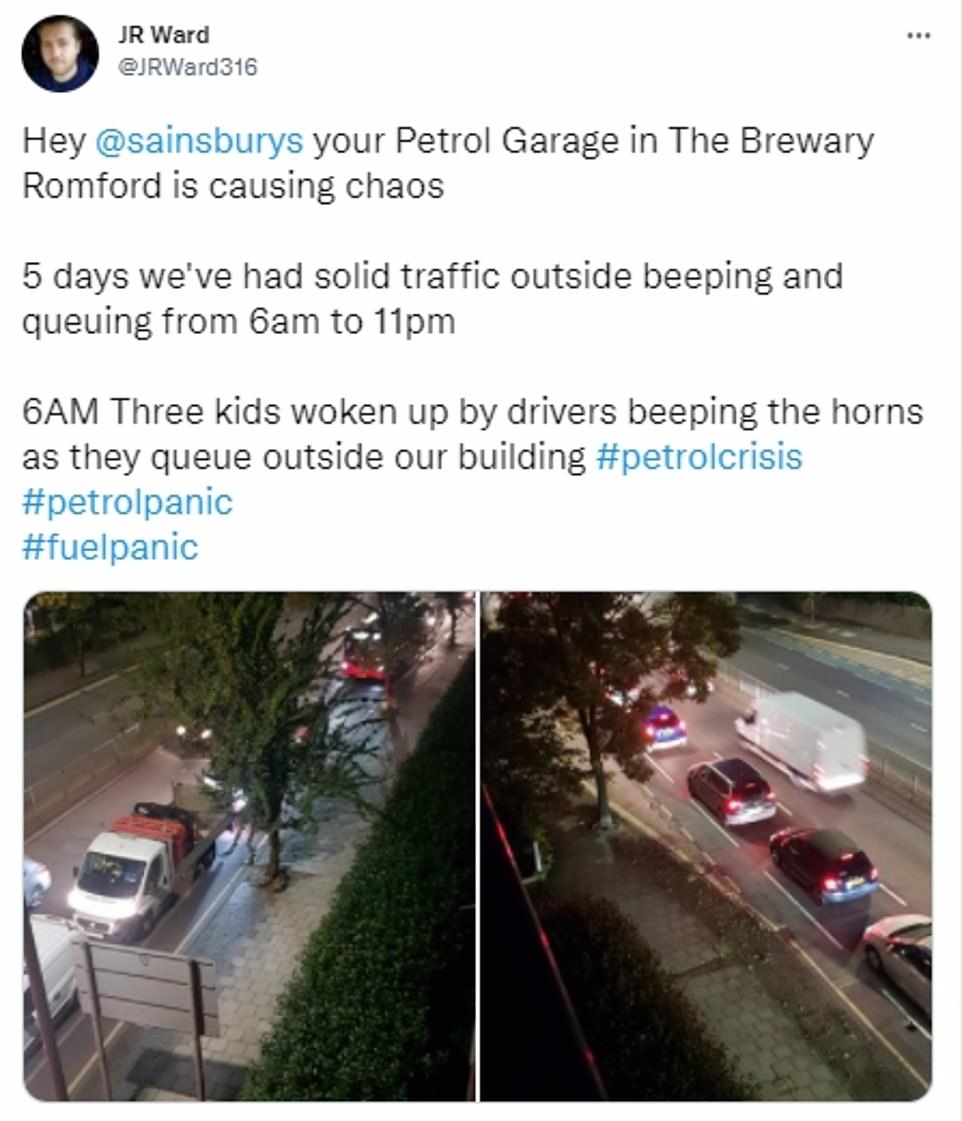 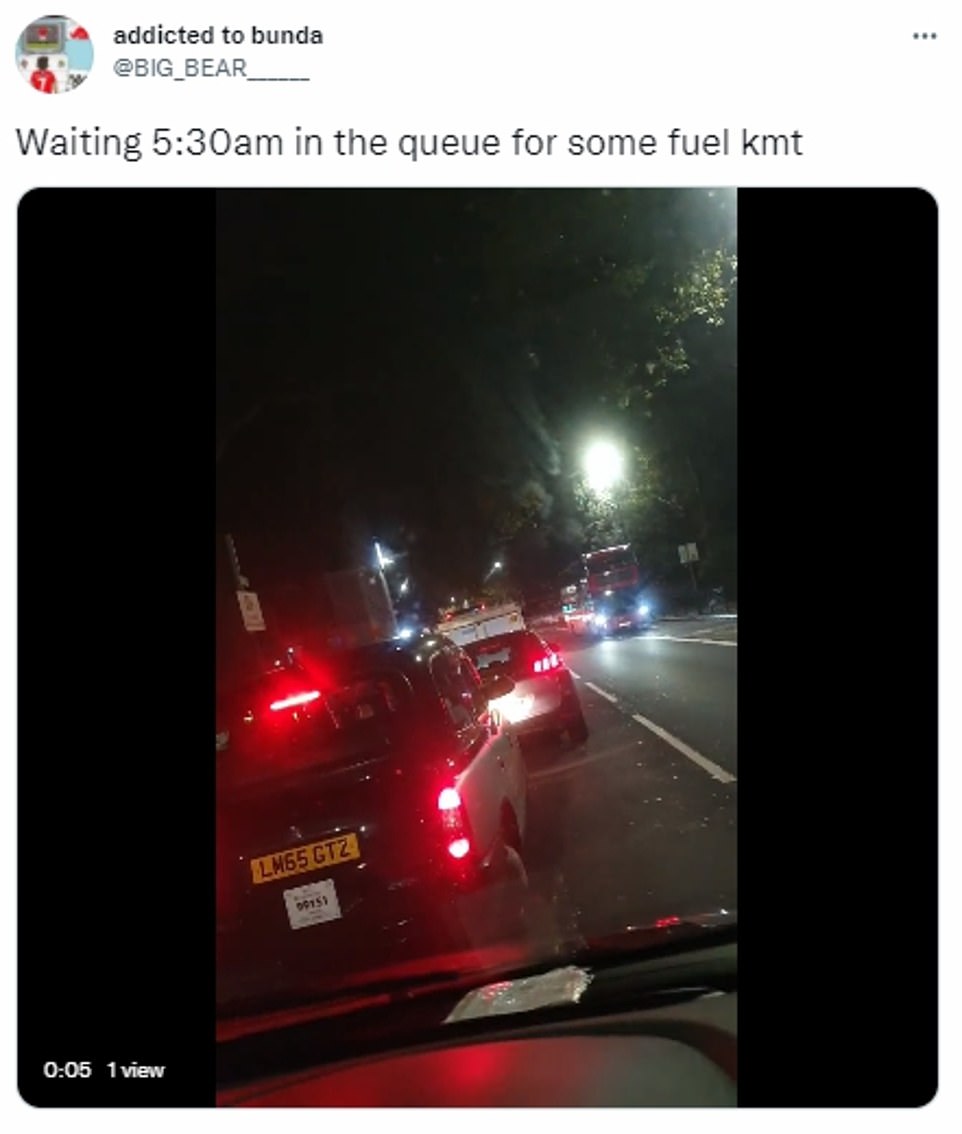 Queues in London this morning at 5.30am as fights break out at the pumps as petrol stations run dry 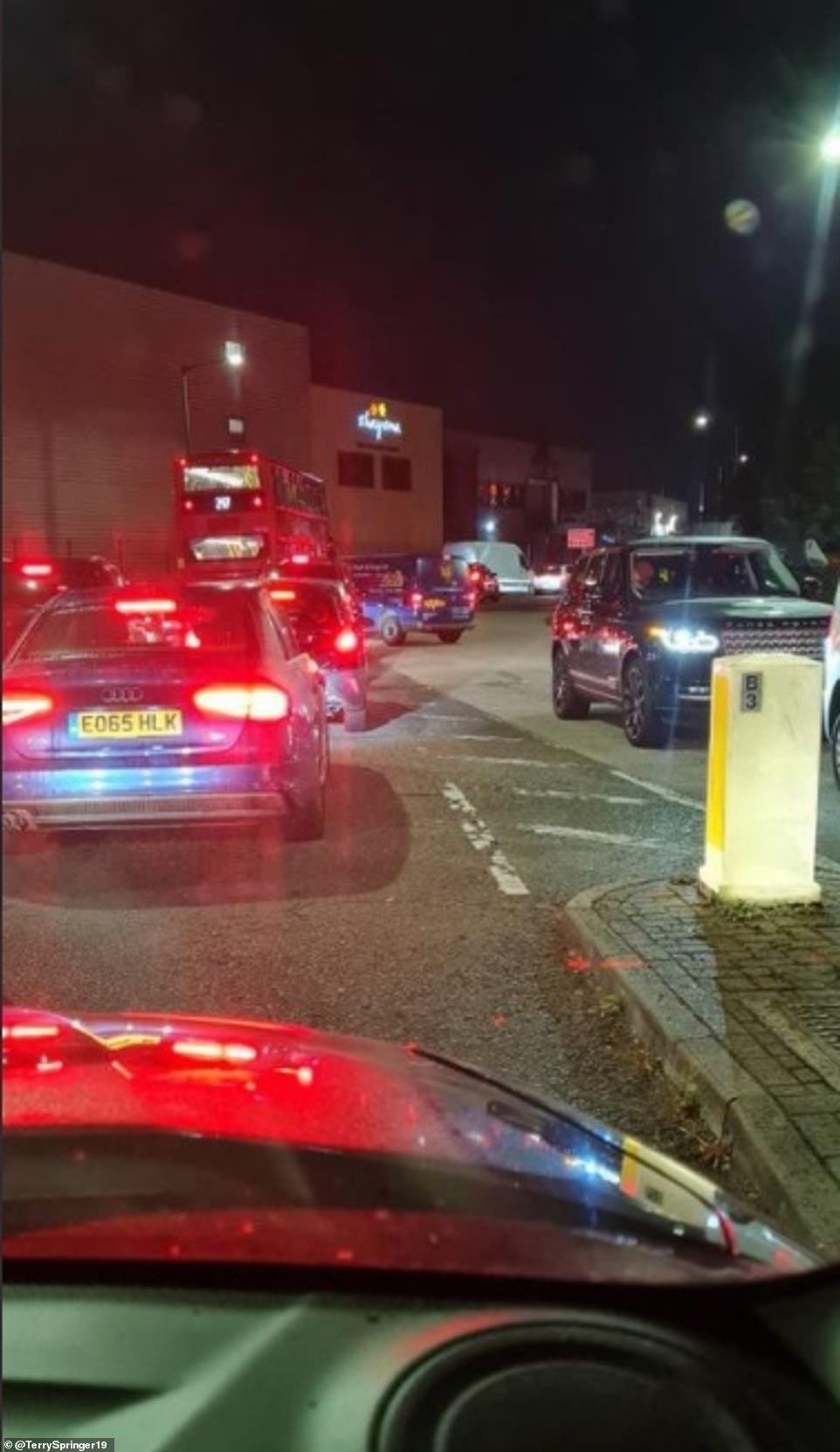 Another option, the designated filling station scheme, could see ’emergency and critical service vehicles’ having priority access. This was done by Tony Blair’s government during the 2000 fuel crisis.

Some areas have already seen bin collections cancelled, and teaching unions have warned that schools could need to go back to online learning if teachers cannot drive to work.

After a dizzying 24 hours of dithering over the use of soldiers to plug the HGV driver gap, ministers agreed to put the Army on standby. It is hoped that panic-buying will ease this week to reduce pressure on fuel supplies. But if the crisis does not abate, ministers will trigger ‘Operation Escalin’.

About 150 military tanker drivers were put into a state of readiness under the operation, sources said. Some of them will receive further training in the next few days to be able to deliver fuel if required. The operation, originally conceived in case of a no-deal Brexit, could potentially see hundreds of troops brought in to help.

He tweeted: ‘Today we’re asking army tanker drivers to be ready to deploy. And extending licences for fuel transporters to keep on road. As joint statement by 10 fuel suppliers says, if everyone buys fuel as normal petrol stations will revert to normal service.’

Chairman of the British Medical Association council, Dr Chaand Nagpaul, told The Times that ‘everyone will have their own reasons for needing to fill up, but as pumps run dry there is a real risk that NHS staff won’t be able to do their jobs and provide vital services and care to people who urgently need it’.

National officer of the GMB union, Rachel Harrison, told The Mirror: ‘During this completely avoidable crisis, petrol must be prioritised for those key workers who save lives and keep the country moving.’