Smokers who get Covid are 80 per cent more likely to be admitted to hospital than those who don’t touch cigarettes, a study claimed today.

The research, by Oxford University, paints a clearer picture on the confused topic of smoking and coronavirus.

At the start of the pandemic, scientists were baffled by data which showed smokers were less likely to be hospitalised with the virus. Some analyses even suggested they faced a smaller risk of getting infected in the first place.

But the new study, based on more than 420,000 patients, found smokers were much more likely to fall seriously ill if they got infected.

However, it didn’t look at whether smokers were less likely to test positive in the first place.

Experts claimed the ‘respiratory pandemic’ was likely an ideal moment to focus on quitting smoking.

Around 6.9million Britons smoke, but more than half have already said they want to quit. In the US there are 34.1million smokers. 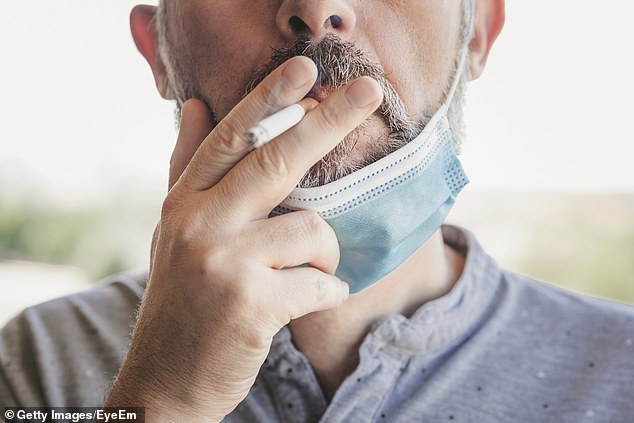 Covid-infected smokers are more likely to be hospitalised or die than those that have never smoked, research suggests. It comes after other papers at the start of the pandemic suggested the opposite was the case (stock image)

Results of the study showed that among nearly 14,000 smokers, there were 51 Covid admissions.  This was equivalent to one in 270 being hospitalised.

There were also up to 36 deaths, equating to one in 384 succumbing to the virus.

For comparison, among the 250,000 non-smokers there were 440 hospitalisations, equivalent to one in almost 600.

Researchers added there were a further 159 Covid deaths, equivalent to one in 1,666.

At the start of the pandemic studies emerged suggesting smokers who caught Covid were less likely to be hospitalised than those who had never picked up a cigarette.

Papers adding evidence to this theory included one from University College London published in April last year, which found the proportion of Covid admissions that were smokers was ‘lower than expected’.

Scientists were left baffled by the findings, branding them ‘bizarre’.

But as the pandemic progressed other studies began to undermine the claims.

The first conclusive evidence that in fact the risk of developing severe disease among smokers was double that of non-smokers came from a King’s College London study in January.

It also found smokers were 14 per cent more likely to have the three main symptoms of the virus: fever, persistent cough and loss of taste and smell.

And found they were 50 per cent more likely to suffer a myriad of other symptoms including cough, fever, shortness of breath, and diarrhoea.

Oxford University scientists looking at the records of 421,000 UK patients — including 13,000 smokers — is the latest study to find smokers were more at risk from the virus.

Further analysis, published in the journal Thorax, showed a gradient effect in risk, offering yet more evidence that smoking really does raise the risk of severe illness.

Light smokers — who had up to nine cigarettes a day — were twice as likely to die from the virus as non-smokers.

Moderate smokers — who had 10 to 19 cigarettes a day — were five times more likely to succumb to the virus.

And heavy smokers — classed as puffing on more than 20 cigarettes a day — were six times more likely to die.

Dr Ashley Clift, the lead researcher, said: ‘Our results strongly suggest smoking is related to your risk of getting severe Covid.

‘Just as smoking affects your risk of heart disease, different cancers, and all those other conditions we know smoking is linked to, it appears that it’s the same for Covid.

‘So now might be as good a time as any to quit cigarettes and quit smoking.’

He added: ‘A respiratory pandemic should be the ideal moment to focus collective minds on tobacco control.’

Swathes of studies at the start of the pandemic showed a low prevalence of smokers in hospitals with Covid.

The first paper to challenge the touted theory was published in January by King’s College London and health data science company ZOE.

They found that smoking doubled the risk of severe Covid and hospitalisation, and were 14 per cent more likely to suffer the three main symptoms than people who had never picked up a cigarette.

Smokers were also 50 per cent more likely to develop one of ten other symptoms they said, including cough, fever, and loss of appetite.

At the start of the pandemic, when little was known about SARS-CoV-2, researchers instinctively warned smokers would be at higher risk.

But studies emerged which suggested the opposite may be the case, which left experts floundering and calling them ‘bizarre’.

The World Health Organization declared in June last year, however, that smoking may make people more susceptible to Covid.