Whatever the meal, breakfast, lunch or dinner, there’s something Ndah Mbawa can never go without.

‘I’m addicted to chilli,’ says the 43-year-old. ‘I can’t have food without it. If I’ve not had it for a few days, the food doesn’t go down the right way.’ And Ndah loves it so much she runs her own chilli oil firm.

Chilli is an ingredient that divides palates, but those who can’t do without it describe being ‘addicted’ to chilli — with this ingredient, it is not just a turn of phrase, and it’s one addiction that could be actively healthy.

‘This binds to receptors in your mouth, known as TRPV1, which send a signal to your brain that your mouth is burning,’ she says. 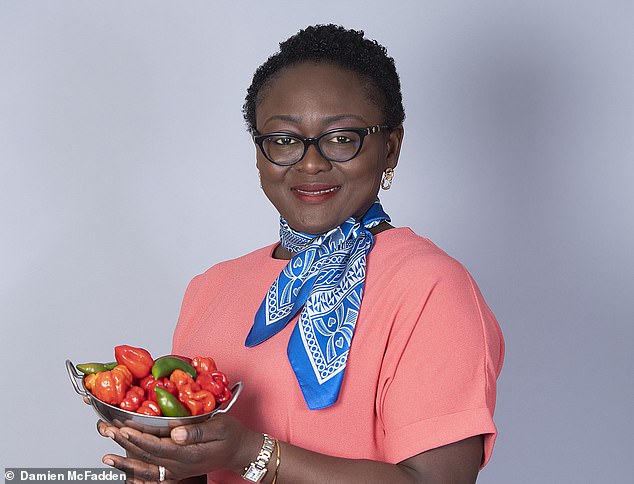 Whatever the meal, breakfast, lunch or dinner, there’s something Ndah Mbawa can never go without

‘Our bodies respond to the heat by producing the stress hormone adrenaline, which in turn causes the release of endorphins, the body’s natural painkillers. Endorphins are also known to boost feelings of pleasure, leaving you with a natural happiness hit.’

They do this by interacting with receptors in the brain that reduce perception of pain. Chilli also encourages the release of dopamine, a brain chemical involved with our sense of reward and pleasure. ‘You can become addicted to anything that indirectly stimulates brain chemicals that boost mood,’ says Dr Ilan Lieberman, a pain medicine consultant at the University Hospitals of South Manchester.

‘So when you eat a strong chilli, you might get a kick out of that feeling — and even become addicted to it. That then becomes learned behaviour.’

For others there is a more controversial explanation: Paul Rozin, a psychologist at the University of Pennsylvania in the U.S. who has researched chilli-eating, believes that for some it’s a form of benign masochism.

‘People cosseted by civilisation need a jolt, and roller coasters and hot peppers provide it,’ he says. 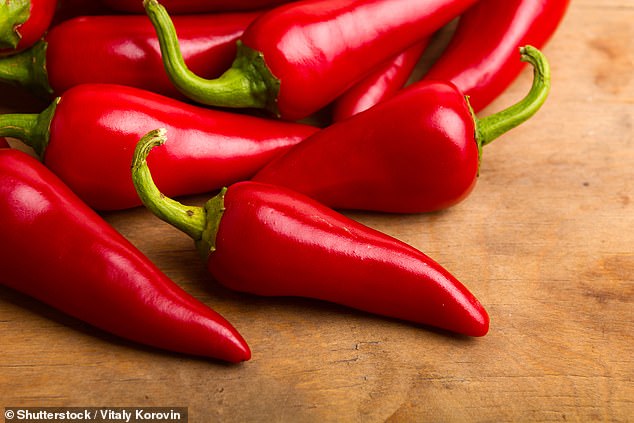 Whatever its root, the ‘addiction’ may not be a bad thing. Chilli also has a range of known health benefits, including reducing the risk of dying from cardiovascular disease by 26 per cent if consumed regularly, according to the American Heart Association — and it cuts the chance of death from a stroke by 61 cent, reports the British Heart Foundation. This is possibly because capsaicin has anti-inflammatory effects.

Capsaicin may also help weight loss. A 2018 study by the University of Wyoming in the U.S. showed that mice eating a high-fat diet lost weight after using a new drug, metabocin, which slowly releases capsaicin throughout the day.

Forcing yourself to stay awake might help with insomnia, according to the Journal of Sleep Research. This ‘paradoxical intention’ technique, where you try to remain awake for as long as possible, distracts you from trying to get to sleep and feeling anxious.

Swedish scientists say those struggling to sleep may try too hard, resulting in frustration and the stimulation of the autonomic nervous system, which regulates heart rate. Activating it can interfere with sleep onset.

The researchers suggested the capsaicin increased the rate at which the mice digested food and burnt more energy.

Other research found it may help with mental health conditions, such as depression and panic. A review, published in the journal Behavioural Brain Research last year, found blocking the TRPV1 receptors had an antidepressant effect.

Andrea Escelsior, an assistant professor of psychiatry at University of Genoa, Italy, who led the research, explains that TRPV1 is connected to other receptors involved in our body’s reward system, including a cannabinoid receptor, CB1.

This is activated by endocannabinoids produced by the body (and which may have a balancing effect on the brain) as well as cannabis compounds, and could explain the positive effect on mood.

Dr Escelsior says that there are many natural inhibitors that work to block the TRPV1 receptors, including anti-inflammatories such as omega-3 and omega-9 fatty acids.

However, he adds that in large enough quantities, in theory, chillies could be an inhibitor. This is because they can also desensitise the receptors, as Dr Escelsior explains: ‘It’s the same effect you experience when you eat chilli peppers and you feel your mouth burning, but after a point feel numbness. This is due to the desensitisation of the TRPV1 receptors.’

However, he emphasises that chilli itself hasn’t been studied as a TRPV1 inhibitor in recent years. Instead there’s now evidence for another incredibly spicy compound found in a type of cactus.

Called resiniferatoxin, it is ‘a pungent compound 10,000 times hotter than the capsaicin’ (and definitely not for consumption).

Dr Escelsior explains that the compound has been proven to successfully desensitise the TRPV1 in animals [in knee pain-related studies] — so, in theory the right dose in chilli peppers could do the same.

The heat or burn of a chilli pepper is measured in Scoville heat units: the number of times a sample of dissolved dried chilli must be diluted by its own weight in sugar water before it loses its heat.

For an average green bell pepper this is zero, habanero peppers are between 100,000 and 350,000 and pure capsaicin (akin to that in resiniferatoxin) is 16 million (far hotter than can be safely consumed). The heat comes primarily from an area of the fruit called the ‘placenta’ that connects the seeds to the fruit.

Ndah is convinced ‘eating as much chilli as I do makes me feel good’.

‘I rarely get ill,’ she says. ‘And if, say, I get a bit of a sniffle or a blocked nose, I’ll make a hot soup and that clears the sinuses.’

If you want to try it, she suggests starting with milder forms, but warns ‘once you start trying chilli you’ll feel lost without it’.