British experts have sounded the alarm about a new Covid variant believed to have emerged in Botswana that is the most mutated version of the virus yet.

Only 10 cases of the strain, which could be named ‘Nu’, have been detected so far but it has already been spotted in three countries, suggesting it is more widespread.

It carries 32 mutations, many of which suggest it is highly transmissible and vaccine-resistant, and has more alterations to its spike protein than any other variant.

Changes to the spike make it difficult for current jabs to protect against, as they have been designed to train the body to recognise that part of the virus.

Dr Tom Peacock, a virologist at Imperial College, who first picked up on its spread, described its combination of mutations as ‘horrific’.

He warned that B.1.1.529, its scientific name, had the potential to be ‘worse than nearly anything else about’ — including the world-dominant Delta strain.

Three infections have been detected in Botswana and six in South Africa – where variant surveillance is more robust.

The 10th patient was a 36-year-old man from Hong Kong who recently returned from the continent.

There are no cases in Britain. But UK Health Security Agency officials, which took over from Public Health England, said they were monitoring the situation closely. 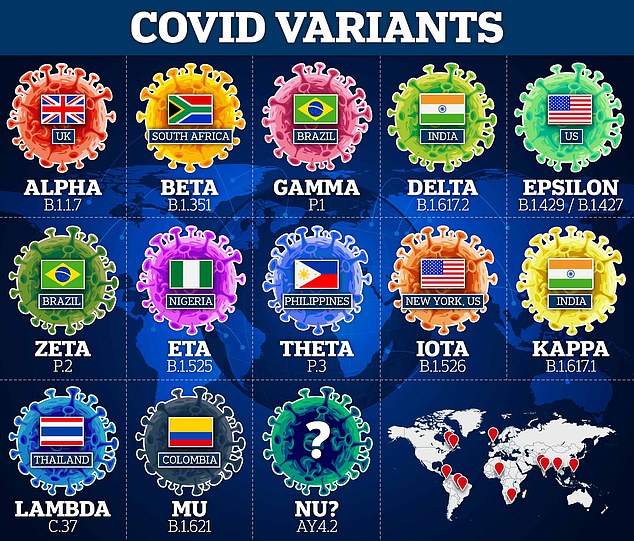 The mutant variant has sparked concern because of its ‘very extensive’ set of mutations.

Professor Francois Balloux, a geneticist at University College London, said it was likely the variant would be much more able to dodge antibodies than Delta.

He told MailOnline: ‘For the time being, it should be closely monitored but there’s no need to be overly concerned, unless it starts going up in frequency.’

He said its ‘burst’ of mutations suggests it may have emerged during a chronic infection in an immunocompromised person, such as an HIV/AIDS patient.

Professor Lawrence Young, a virologist at Warwick Medical School, said it ‘looks like’ this mutant strain could be better at dodging vaccine-triggered immunity than other mutants based on its mutations.

But he added: ‘It’s always difficult to say just by looking at [mutations], and so much depends on how the immune system sees the change and responds.

‘But it looks like just because of the severe load of [mutations] — some of which we know about quite a bit in terms of harming transmission — it looks like it might be slightly more qorrying than the South African variant.’

He said it was hard to tell whether the virus would be more transmissible than Delta at this stage.

‘When you have a more transmissible virus in an unprotected population it will spread into people,’ he said.

‘But when immunity is higher where else does the virus have to go? The only place it has to go is immune evasion.

‘The worry is that you are able to generate viruses that are more transmissible that may be able to outcompete Delta.’

The Botswana variant carries mutations K417N and E484A that are similar to those on the South African ‘Beta’ variant that made it better able to dodge vaccines.

But it also has the N440K, found on Delta, and S477N, on the New York variant, which are also linked to antibody escape.

The variant also has mutations P681H and N679K on a specific part of its spike protein responsible for infection.

And the mutation N501Y that makes viruses more transmissible and was previously seen on the Kent ‘Alpha’ variant and Beta among others.

Dr Meera Chand, from the UKHSA, said: ‘The UK Health Security Agency, in partnership with scientific bodies across the globe, is constantly monitoring the status of SARS-CoV-2 variants as they emerge and develop worldwide.

‘As it is in the nature of viruses to mutate often and at random, it is not unusual for small numbers of cases to arise featuring new sets of mutations. Any variants showing evidence of spread are rapidly assessed.’